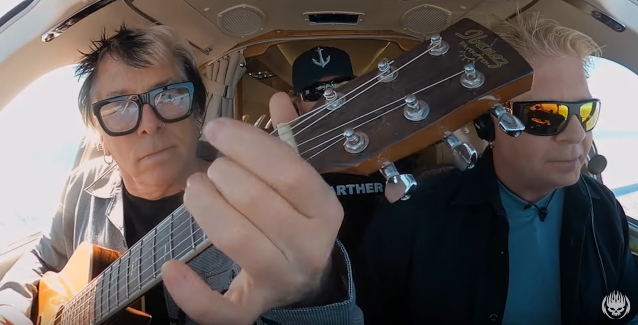 THE OFFSPRING has launched "Cockpit Karaoke", a video series featuring frontman Bryan "Dexter" Holland and guitarist Kevin "Noodles" Wasserman singing along to some of the band's biggest hits from inside a private jet that's being flown by Holland, who is a licensed pilot.

"We know everyone's heard of 'Carpool Karaoke', but 'Cockpit Karaoke'??? No one's done that!!" Holland told SPIN, which premiered the first clip, featuring the duo singing "Come Out And Play", with the "Keep 'Em Separated Guy" along for the ride. "Since I'm a pilot, we thought it would be great if Noodles and I had some fun and got to sing along to some of our many hits."

THE OFFSPRING's latest album, "Let The Bad Times Roll", arrived in April via Concord Records. The follow-up to 2012's "Days Go By" was once again produced by Bob Rock, who also worked on the band's last two LPs.