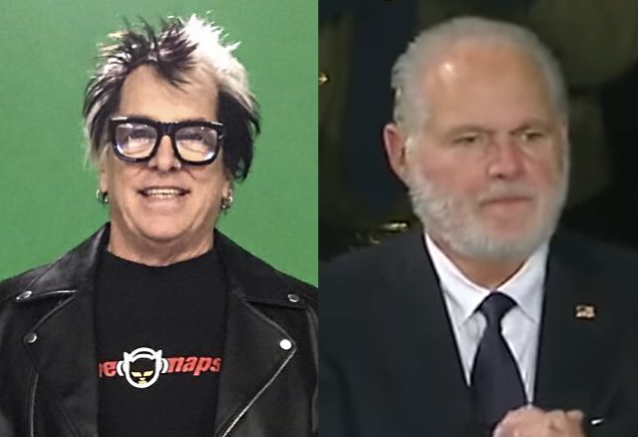 THE OFFSPRING guitarist Kevin "Noodles" Wasserman is one of many liberal social media users who lambasted radio show titan Rush Limbaugh after it was announced that he died following a battle with cancer.

"When Rush Limbaugh had a TV show we had to ask him NOT to use COAP as bumper music," Noodles tweeted, referring to THE OFFSPRING song "Come Out And Play" from the band's third album, 1994's "Smash". "We did not want to be associated with him in any way. He was a dishonest bigoted hypocrite who got rich by exploiting people's fear & by dividing the country."

Rush had a long history of making disparaging comments about minority groups, the LGBTQ community, suicide, AIDS patients and women, earning him a reputation as a racist, sexist and homophobe.

Limbaugh's wife, Kathryn, made the announcement of his death on his radio show.

She added: "From today on, there will be a tremendous void in our lives, and on the radio."

Rush was diagnosed with stage four lung cancer in January 2020 and was awarded the Presidential Medal of Freedom by President Donald Trump at the State of the Union address days later.

THE OFFSPRING's long-awaited tenth album will arrive later this year. The follow-up to 2012's "Days Go By" was once again produced by Bob Rock, who also worked on the band's last two LPs. "

When Rush Limbaugh had a TV show we had to ask him NOT to use COAP as bumper music. We did not want to be associated with him in any way. He was a dishonest bigoted hypocrite who got rich by exploiting people’s fear & by dividing the country.