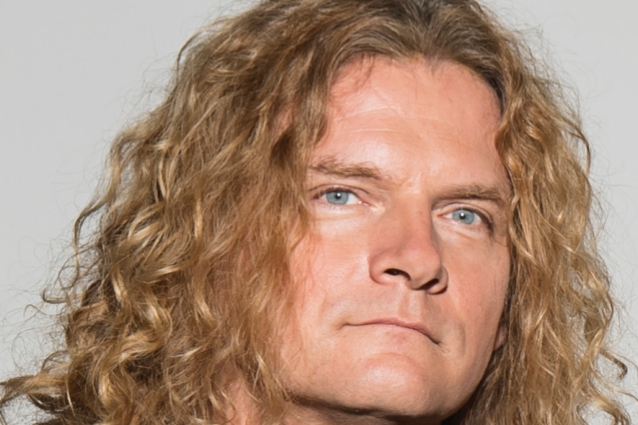 TESLA guitarist Frank Hannon has reflected on the passing of Eddie Van Halen, saying Eddie represented everything he loved about guitar "but taken to a whole other futuristic level." The legendary VAN HALEN axeman died on October 6 at the age of 65 after a long battle with cancer.

Speaking to the "Thunder Underground" podcast, Frank said: "When 'Van Halen I' first came out in 1978, I had been playing guitar for about — I don't know — a year or so. I was 11 years old. And my cousin and I, we were listening to CREEDENCE CLEARWATER [REVIVAL]. The hardest heavy rock that we were listening to would be AEROSMITH and stuff like that, maybe Ted Nugent. But then when 'Van Halen I' came out, I got the record at a store called Tower Records here in Sacramento and brought it home. And it blew my mind. I would try every trick in the book with the turntable to slow it down to try to figure out what the heck he was playing. Especially 'Ain't Talkin' 'Bout Love', the guitar riff to 'Ain't Talkin' 'Bout Love', the intro to that just sounded like a machine. I had never heard a guitar player play with such aggressive conviction and sound like Eddie Van Halen did on 'Van Halen I'."

Asked if hearing VAN HALEN's first album changed the way he played the guitar, Frank said: "Well, I wasn't really that good of a guitar player at 11 years old anyway, so it didn't really change the way I was playing other than it just freaked me out and kind of scared me a little bit, like, 'Wow! How is that even possible?', to create a sound like that, that was so technically perfect but aggressive and bluesy and everything that I loved about guitar from all my other guitar heroes, but taken to a whole other futuristic level.

"So, fast forward to when TESLA, we started making our own music and everything, I was definitely influenced by Eddie Van Halen on TESLA's first album, 'Mechanical Resonance'," he continued. "If you listen to 'Cumin' Atcha Live', doing a guitar solo on an album like that… On our first album, we wanted to do our own version of 'Eruption', and so if you listen to 'Cumin' Atcha Live', that was influenced [by Eddie Van Halen]. A lot of my picking technique, like on 'Modern Day Cowboy' and the hammer-ons that we do were influenced by Eddie Van Halen.

"But, to take it even further than that, I kind of had to choose to try to not be like Eddie Van Halen, because everybody, all the guitar players on the planet — George Lynch, the guy from WHITE LION — everybody in the '80s was trying to play Eddie Van Halen style of guitar. So me personally, I decided, well, I can't really do it anyway. As much as I love it, I may as well just stick to playing a Gibson SG and stay more classic-orientated, if that makes any sense. I had to kind of change my style to try to find an original style.

"Eddie Van Halen definitely influenced me as a guitarist who liked to play keyboards as well," Hannon added. "So, even if you listen to TESLA's first album, 'Changes' and stuff that I was doing on the piano was influenced by the fact that Eddie played both piano and guitar, and that influenced me a lot."


Thank You Eddie!! “I’ve been reading so many great tributes to Eddie Van Halen since his passing yesterday. Like you all, I’m very sad... Eddie was and is the coolest and greatest! So many people were touched by his fire for music and spirit for innovation of guitar (keyboards too!!) He was a great songwriter who created the sound track of our youth with SO many great songs, making this world a fun place. Thank You Eddie Van Halen for the innovation and inspiration. You definitely influenced TESLA and Me as a guitarist and songwriter in every way with your albums filled with melodic songs, mind blowing riffs, hooks, awesome tone, choruses ...and overall passion pushing boundaries that were never heard before. Thank You Eddie... God bless” - Frank . . . . . #ripeddievanhalen #eddievanhalen #frankhannin #tesla #teslaband #vanhalen