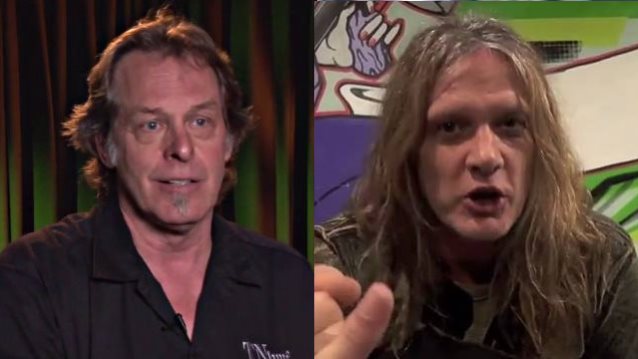 Ted Nugent has slammed Sebastian Bach as "stupid" and "inconsequential" after the former SKID ROW singer implied that the outspoken conservative rocker was racist.

In his 2016 memoir, "18 And Life On Skid Row", Bach wrote about how Nugent, whom he considered to be one of his musical idols, allegedly went on a racist tirade on the set of the VH1 reality show "SuperGroup", causing Sebastian to step into the role of unlikely hero to the African-American crew by walking out and going to the producer, refusing to continue working with the Nuge.

During a brand new interview with QFM96's "Torg & Elliott" radio show, Nugent was asked if he had heard about Bach's comments. He responded (hear audio below): "No, I have not heard that. He falls in the 'inconsequential' column. It's true — the guy smokes so much dope. People like Sebastian Bach will literally listen to me praise Chuck Berry and Bo Diddley and Little Richard and James Brown and Wilson Pickett, they'll listen to me praise these black artists and literally call it racist. I mean, how much dope do you have to smoke to be that stupid?"

He continued: "Literally, I'm the one during that TV show that pounded home that we cannot lose touch with our black founding fathers, that if you don't have that groove of the black artists, if you don't have the Chuck Berry and Bo Diddley and Little Richard and James Brown groove, your music is worthless. That's what I drove home. And he would call that being a racist? This is funnier than Richard Pryor's afro catching fire. I mean, how stupid can you get?"

In a 2012 interview with Metal-Rules.com, Bach stated about Nugent: "To be honest with you, I think that Ted's political beliefs and social opinions overshadow how great a guitar player he is. More people know Ted for his outrageous views and political viewpoints. His music is so great, but a lot of people are disgusted by him. They don't like guns. People don't like racism, but he says some things that are from the '50s. People don't think like that anymore; it's not acceptable. It's a shame because I love his music and he is funny as hell. He is so abrasive with his beliefs, it takes the fun out of it."

Nugent told Radio.com in 2014 that Bach was "incredibly gifted" and "a gentleman for the most part," but he called the former SKID ROW singer "weak." Nugent explained: "[Sebastian] doesn't understand the concept of the [body as a] Sacred Temple. He doesn't understand accountability. He doesn't understand — clearly — how his indulgences and his poisons ruin his life. And his relationships, and his marriage. And his musical capabilities. I love the guy and if he's watching this, I love you, but when you're the drunk Sebastian Bach, you're nowhere near the Sebastian Bach that you are when you're clean and sober. Case closed. That isn't a Ted Nugent opinion, that's scientific truism."