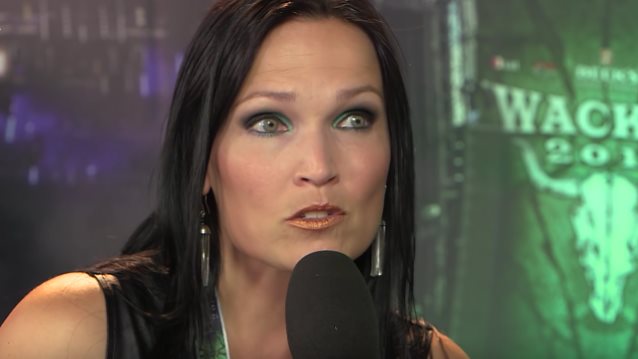 ARTE Concert conducted an interview with former NIGHTWISH frontwoman Tarja Turunen at this year's Wacken Open Air festival, which was held August 4-6 in Wacken, Germany. You can now watch the chat below.

Asked if she ever gets told by anyone that she needs to slow down her work schedule sometimes, Tarja said: "Surely, I get a lot of this, firstly from my fans. They are super… They do really care. And I get to read comments: 'You're never, ever resting. What's going on? Take a break.' I read that a lot. But then again, I live my dream, and I really do enjoy so much what I do."

She continued: "I love this freedom that has been given to me as an artist to express myself. But I have a family, and I do want to have time with my family, and that kind of things, obviously, they have become more and more important to me. I need to have my rest, because I'm getting older; I'm turning 40 next year. I'm telling you that the mind is still from the 20, but the body is not, so you need to take care; you need to really take care and have time for yourself. And time is only limited in this way of working I'm doing. But I have understood it: okay, these couple of last years have been crazy — crazy."

Tarja's new heavy rock album, "The Shadow Self", was released on August 5 via earMUSIC.

Tarja stated about the two albums: "I am sure that everyone will immediately discover how much 'The Brightest Void' and 'The Shadow Self' are entwined with each other but, at the same time, are two independent records which stand on their own."