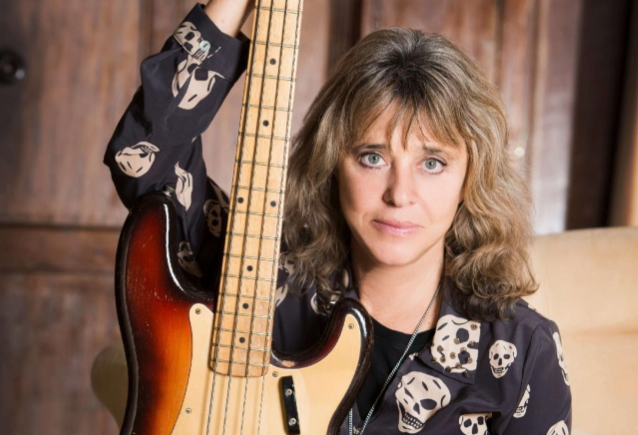 Suzi Quatro, the 70-year-old pioneering female rocker who burst on to the scene in the 1970s, has just released a new Christmas single, "My Heart And Soul (I Need You Home For Christmas)".

Quatro explained the song's genesis: "So, lockdown had just begun. My son was in the studio working on ideas every day for our next album, a perfect opportunity as neither of us was 'on the road.' I was sitting on the patio, relaxing, and heard this absolutely beautiful track coming out of the open studio door. It was a bass line, with a sparse guitar chord, and drums. It was immediate for me. I ran into the studio (mask on, of course), and told my son to set up a microphone, and without thinking, without writing anything down, I sang the first four lines of the song exactly as they ended up. That's when you know you have a great song... and we do. Merry Xmas everyone!"

The official video for "My Heart And Soul (I Need You Home For Christmas)", produced by Thomas Davis, can be seen below.

Quatro's latest studio album, "No Control", was released in March 2019 through SPV/Steamhammer.

Said Quatro: "I've never stopped releasing through the years. 'Back To The Drive' in 2006, 'In The Spotlight' in 2011, 'Quatro, Scott & Powell' in 2016. These albums were thought about and planned out in great detail. I am proud of all three releases, very proud. But my new album 'No Control' is its own animal."

According to Forbes, Quatro has written a number of songs with her son during the pandemic lockdown for her next record.