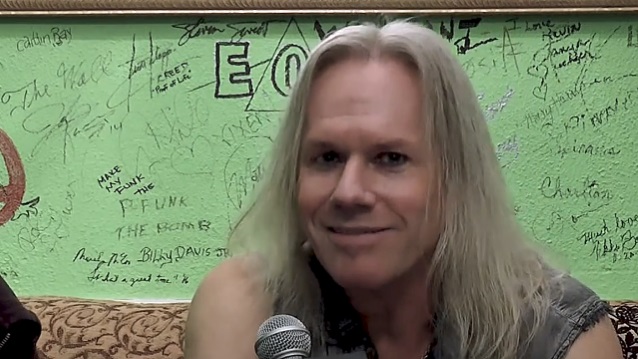 WARRANT frontman and off-and-on LYNCH MOB vocalist Robert Mason was recently interviewed by Straus Project. The full conversation can be viewed below. A few excerpts follow (as transcribed by BLABBERMOUTH.NET):

On being a member of multiple active bands and projects:

Robert: "George [Lynch] had asked me to do some LYNCH MOB dates. I was available. WARRANT's my priority. He understands that. Hopefully the world understands that, because the interwebs were going, like, 'What band is he in?' Don't worry about it. Do you know Corey Taylor? He's in a couple bands. Myles Kennedy, also a friend of mine, [is] in a couple of bands. I'm in a band, you're in a band, so what? We've sat in more dressing rooms with more other bands, and looking around, we're all smiling and happy and sharing beers, and sometimes even dressing rooms after shows. The difference is we're all smiling now. We were in the same situation years ago, certain bands, and there was always... I guess it was a little more, you're younger men. There's a little more piss and vinegar, testosterone and rivalry going on. Now, I'm completely, 'I'm in a band, you're in a band, cool.' I think if you last long enough, you start to gain a greater appreciation for that, and that probably manifests itself in you just being a little more relaxed in your own skin and your band's skin."

On whether it's difficult to juggle numerous projects:

Robert: "I think of it as, I retire one or two days a week, and then I go back to work. I go home and [do] laundry, unpack, repack, that sort of thing, enjoy the fruits of your labor somewhat — I have fun hobbies; I have stuff I collect; I have stuff I like to do. But I'm really happiest — and I sound so cheesy when I say this, [but] it's the honest-to-God truth — I'm on this side of the microphone, and people are on that side, and I get to do that. It's never been lost on me that I have a wonderful profession that I lucked into, carved out for myself, figured out how to do, worked hard at enough. The harder you work, the luckier you get."

On how he balances feeling like he deserves to have a certain gig with being thankful for the opportunity:

Robert: "It's a combination of both. It's like the like between art and commerce. You write a song, but you'd like it to be successful because you want people to hear it — unless you want to be completely artsy and into yourself, and there's nothing wrong with that either, but I've always been the former."

On the "math" of a song, and his formal music instruction during his childhood:

Robert: "I was an English major in college. I'm a poetry fan. There's iambic pentameter. I got trapped in that for a while, early songwriting, writing in that [box], or writing in troachic [tetrameter]. To get away from that, then you discover songwriters that throw all those rules out and just go with the feel f something. Sometimes things just work out great and are pleasing to the ear, but when you think of them, you're like, 'Ehh, I don't know whether this is going to work,' and all of a sudden, with the right riff or the right chordal thing, it comes together and makes an amazing song. The math of it, as far as just understanding music theory, I was taught it, and I ran away from it, because being young and stupid in a sense — being a rebellious kid — instead of reading my piano charts, I would learn them, and my ear was better than my want to straight-read a chart like a session musician can. My ear was much better, thankfully, than my want to learn theory. I would learn a piece — I would go through the exercise of learning it — but then I would have it my head, and I would play it from memory staring blankly at the sheets of music. Eventually my piano teacher got hip to it — like, 'You're not reading.' I said, 'Yeah, I read it once, and I learned it.' Even as an eight-year-old kid, I was that snotty. I just wanted to be a loud rock kid. Although I'm classically trained [vocally] for a bunch of years, I didn't want to sing in Italian or German and wear a tux. I didn't want to sing opera. I didn't want to do that. I was always the rock kid, so I had opera teachers and coaches that would refuse to accept what I wanted to do, and pushed me in a direction I didn't want to go. I didn't go very long in that direction. I always rebelled."

Robert: "I'm about three-quarters of the way done with that record now. I go back in a couple of weeks to Jeff Pilson's house and try to finish. We're getting along so well and writing and having such fun writing in the studio. A riff that George writes, or a thing that George and Jeff come up with musically, that's the way that that record has come about. I've let them just overwrite, and then whatever parts of it give me a lyrical or melodic idea, then Jeff and I get in his studio and play cut-and-paste in the digital realm. They're super-amenable to that."

Mason initially joined LYNCH MOB in 1991 and performed on the group's self-titled 1992 sophomore album. He also can be heard on 2003's "REvolution", which featured re-recordings of select tracks from the group's first two albums and a handful of classic DOKKEN songs.