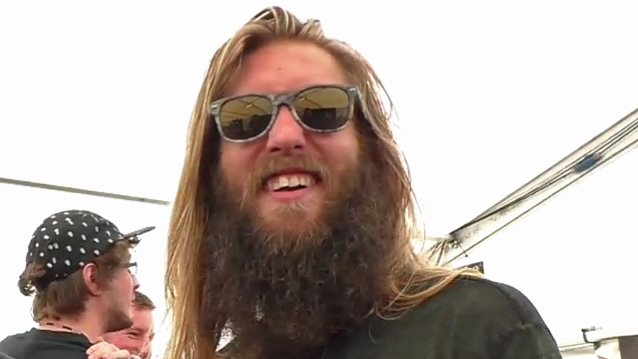 "Mike James Rock Show" conducted an interview with guitarist Mark Heylmun of California deathcore masters SUICIDE SILENCE at this year's Download festival, which was held June 9-11 at Donington Park in Leicestershire, England. You can watch the full chat below. A few excerpts follow (transcribed by BLABBERMOUTH.NET).

On SUICIDE SILENCE's controversial new self-titled album, which saw the band take a noticeable change in direction from their traditional deathcore sound:

Mark: "It's easy when there was a pre-destined [idea of how the album will sound], like, we know people will talk shit. We know people might not like this. We know all of it. We already knew, so we kind of prepped ourselves for it. We needed to, at this point in our lives, in our careers, as people, as humans, as kids who started off playing heavy music, we needed to try some shit. We needed to do something different or what the fuck else are we doing? It's easier to keep churning out shit that people expect you to put out. That's the way I feel with our fans; no offense to them. I love them and understand it. I was a fan of so much as a young kid and I didn't want shit to change and when it did, it pissed me off. At the same time, you need to fucking grow. You need to or what the fuck are you doing? Why are you in a band?"

On the band's need to progress:

Mark: "We have to. We knew it. We wanted to go further when Eddie [Hermida, vocals] joined the band. In all reality, we wanted to go fucking super-deep if Mitch [Lucker, vocals] wouldn't have passed [in 2012]. There was so many things we had said and footsteps we had pre-thrown out there that we were going to step into and follow. We had plans for every record until our tenth record. Like, we really talked about that shit. Losing Mitch and all that, it's, like, we kind of had to take a new road, a new way to go about it. Doing [2014's] 'You Can't Stop Me', we felt, 'Well, we wrote a 'maintenance record.' We wrote a record that's not exactly what we would have done if we weren't in that situation.' We wrote a record that makes people stoked that SUICIDE SILENCE is still a band; let's make some heavy shit. Post that record, it didn't satisfy us as much as we would have liked it to. So, let's go do some fucking weird shit. Let's jam together, let's fucking see what comes out naturally and where we are going as individuals, as a band, like, where are we going?"

On whether SUICIDE SILENCE will continue with their current direction on their next album:

Mark: "We're really thinking about it. We're always thinking about it. I think that one, we're still going to go into it with the 'mystery,' because I think the mystery is a lot of what of the goodness of the music fucking sick, is like you don't know what's going to come out and when it does, you're, like, 'There it is.' On the other end, we went into this last record, full mystery, like, 'We don't know what's going to happen.' Now we have a bag of tricks that we learned from while writing this record and we're going to utilize what we did with this last one and just meld everything that we've done in the past and get gnarly. I know that we probably are going to end up having some super-, super-heavy shit, but at the same time, we are having a good time with the fucking melodrama and writing really chill songs."

On whether he thinks SUICIDE SILENCE's fanbase will allow the band to progress:

Mark: "It's all a journey, dude. We could have changed our name and wrote a record and tried to fucking… I don't know. I think the general consensus is that there's a view on bands that it's,, like, 'Oh, every band is trying to become fucking famous and become huge and get on the radio and do all of this stuff.' When a band like SUICIDE SILENCE starts clean singing, you don't get an open ear as much. You just get, 'Oh, what the fuck are these guys trying to do?' They don't listen to it and think about like, maybe this is 'real.' Maybe this isn't an attempt at being something they're not."

On trying to maintain the band's relevance in the face of fan backlash:

Mark: "What better time to make a fucking crazy shift then when we're 15 years deep as a band? We're going to have another 15 years ahead of us and it's, like, I forgot who said it, but it was like 'McDonald's comes out with a new burger, they don't take the Big Mac off the menu.' We have all our old shit, it's all there. It's cool if you want to fucking hate us because we did something you don't approve of, but then who the fuck is the idiot at that point?"

"Suicide Silence" was released on February 24 via Nuclear Blast Entertainment. The CD was produced by Ross Robinson, who has previously worked with KORN, SLIPKNOT, LIMP BIZKIT and SEPULTURA, among others, and was mixed by Joe Barresi (KYUSS, MELVINS, TOOL, QUEENS OF THE STONE AGE).

The controversy over the album's new sound — featuring a more melodic and clean singing style, in the vein of acts like DEFTONES and KORN — even caused one disgruntled fan to launch a petition to stop the record coming out.