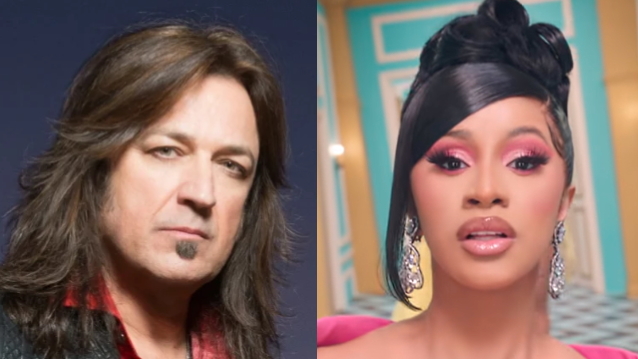 Michael Sweet of openly Christian rockers STRYPER has criticized rap superstar Cardi B over the suggestive lyrics to her single "WAP", saying he doesn't want his granddaughter subjected to that "garbage."

"WAP" debuted at the top of the Billboard Hot 100 chart last month, breaking numerous streaming records and spawning a viral TikTok dance challenge. The track's lyrics, which are about female sexual liberation, have also been the subject of controversy, with several right-wing commentators implying "WAP" was specifically marketed to young girls, when the song's obvious audience is adults.

Sweet offered his opinion of "WAP" in an interview with the "Cobras & Fire" podcast, where the vocalist/guitarist was promoting STRYPER's new album, "Even The Devil Believes".

Asked by host Jason "Bakko" Bakken about his September 2 social media post in which he called "WAP" "a piece of crap," with the word "crap" replaced by a poop emoji, Sweet said: "I don't wanna come across like a prude or someone that is closed-minded, but I just find it interesting how, here we are in 2020 fighting for women's rights, as we should be, and you've got videos like that.

"There's a time when it's not about judging — it's just about what's right and what's wrong," he continued. "I have a little granddaughter who has probably heard that song, and I'm thinking to myself, that just pisses me off. It pisses me off, the fact that she most likely has heard the song, because I don't want that garbage going into my granddaughter's ears.

"I think that we have a responsibility as artists, and many artists cross that line," Sweet added. "I said the same thing about [former child star] Miley Cyrus. Here she is on Disney — all these kids are looking up to her and following her — and the next thing you know, live in concert, she's riding a big, hanging… whatever," referring to the fact that Miley had a giant inflatable penis as a stage prop during her "Bangerz" tour. "And I'm just thinking, can't she just have a little responsibility — even just a smidgen of responsibility?"

Still, Sweet said he respected Cardi B's right to express herself freely as an artist.

"We live in America — she can do whatever she wants, as can I, by commenting on it," he said.

"Even The Devil Believes" was released on September 4 via Frontiers Music Srl.

Call me old fashioned but when I think of my grandkids listening to this and singing along to this piece of ? I get a...