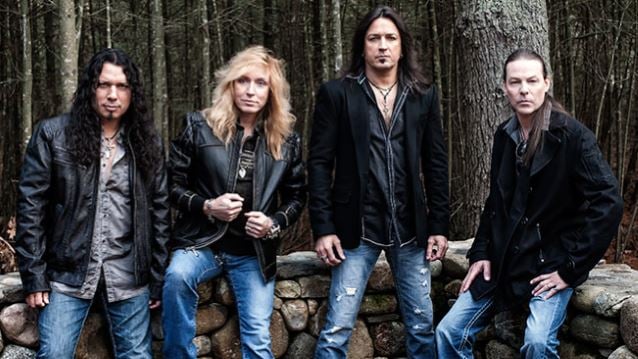 Christian hard rockers STRYPER are recording a cover version of the BLACK SABBATH classic "After Forever" for inclusion on their new album, "Fallen", to be released in late 2015 via Frontiers. The CD was tracked at SpiritHouse Recording Studios in Northampton, Massachusetts.

STRYPER guitarist/vocalist Michael Sweet recently stated about the musical direction of "Fallen": "It's gonna be… I don't wanna scare any fans away or anything, but it's gonna be the heaviest album we've done. Not in the sense that it's gonna be thrash metal or anything like that. It's definitely got a little bit of a darker vibe to it lyrically and musically. Some of the songs are tuned down — not like the modern Drop B stuff; I'm talking like the E dropped to D, 'Unchained' VAN HALEN kind of stuff. And it's just got a heavy sound to it. And I think when people hear it, in a good way, they're gonna go, 'That's STRYPER? What?' I think they're gonna be shocked."

Songtitles set to appear on "Fallen" include "Let There Be Light", 'Big Screen Lies" and the title track.

The new STRYPER CD will include a song that was co-written by SEVENDUST guitarist Clint Lowery.

STRYPER's original lineup comprised of Michael Sweet (vocals/guitars), Robert Sweet (drums), Oz Fox (guitars) and Tim Gaines (bass) released a concert CD/DVD combination called "Live At The Whisky" on September 23, 2014 via Frontiers. The live recording was captured at a sold-out show in November 2013 at the legendary Whisky a Go Go in West Hollywood, California. The 16-track collection documents the band's first show in support of their latest, critically acclaimed release, "No More Hell To Pay".

"No More Hell To Pay" sold around 9,600 copies in the United States in its first week of release to debut at position No. 35 on The Billboard 200 chart. The CD was released on November 5, 2013 in North America via Frontiers Records.