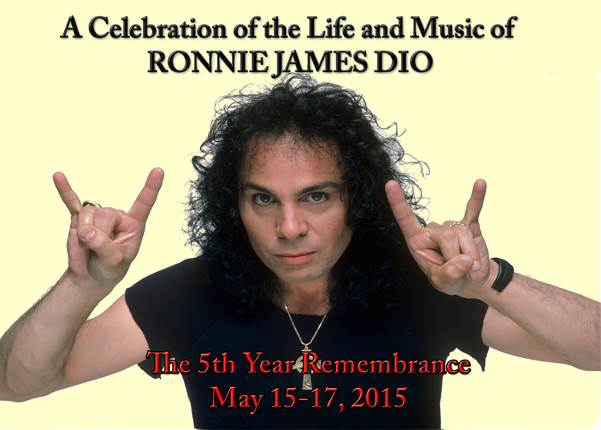 The Ronnie James Dio Stand Up And Shout Cancer Fund, founded in memory of the voice of RAINBOW, BLACK SABBATH and DIO, will host a weekend of celebratory activities to commemorate the fifth anniversary of the singer's untimely death from gastric cancer on May 16, 2010. The events will take place from May 15-17, 2015 in Los Angeles, California, and sponsors so far include: Monster Energy, Krispy Kreme Doughnuts, 100.3 FM The Sound, Ninkasi Brewing, and Western Bagels.

Today, the Ronnie James Dio Stand Up And Shout Cancer Fund is pleased to announce the initial celebrities that will be in attendance at the events, plus select "Bowl For Ronnie" celebrity bowlers and musicians performing at the memorial and the "Ride For Ronnie BBQ" at Los Encinos State Park. In addition, "That Metal Show"'s Eddie Trunk will be the host for all of the weekend's events.

Below is a list of celebrities and musicians that will be in attendance of various weekend events. A specific list of attendees confirmed to bowl and BBQ performers will be released prior to the event.

In a band statement, Jack Black and Kyle Gass of TENACIOUS D state: "Let's roll some balls in honor of the greatest heavy metal singer of all time!"

As previously announced by Ronnie James Dio Stand Up And Shout Cancer Fund co-founder/president Wendy Dio, the weekend will include a public Memorial Service, as well as a Bowl For Ronnie celebrity bowling tournament and the inaugural Ride For Ronnie motorcycle ride and BBQ. See below for an updated listing of activities, ticket prices, and other information.

Hosted by Eddie Trunk of VH1 Classic's "That Metal Show", this will be an evening of fun, food, entertainment and, of course, bowling with rock stars and celebrities competing for trophies in the name of raising funds and awareness for the Ronnie James Dio Stand Up And Shout Cancer Fund. A silent auction will include collectible bowling pins autographed by artists such as AEROSMITH, FLEETWOOD MAC, YES, ANTHRAX and METALLICA, in addition to many more major items. Music will be provided by KNAC.com's DJ Will.

Individual Bowler
($75 per person)
Event entrance for one, Two drink tickets, All you can eat pizza, Shoe rental & bowling

Team/ Corporate Lane
($1,500 one lane with 6 bowlers)
Show off your team skills and charitable spirit. Gather your friends or represent your company with this fun package deal. Trophies and bragging rights for the ages. Lane for 6 bowlers including shoe rental, your company or team name added to three day event program, your company or team logo displayed on your lane and throughout event on flat screens, pizza and 2 drink tickets per person. Lane purchase includes 2 VIP party passes, (Additional VIP party passes sold separately up to 6 per lane)

A FREE public memorial service will take place at Forest Lawn Hollywood Hills on Saturday, May 16 to celebrate the fifth anniversary of Ronnie's passing. Several former band members and friends who worked with Ronnie over his illustrious career are expected to speak and perform his music. As seating for this event is limited, if you are interested in attending, please send an email, along with your name, phone number and the number of seats to: info@diocancerfund.org

Riders will check in at Harley-Davidson of Glendale, where they can enjoy a continental breakfast with entertainment and prizes provided by The Sound 100.3. The first 200 registered riders will receive a limited edition Ride For Ronnie Challenge Coin! Participants will depart Glendale, traveling the freeways of the north San Fernando Valley, then down the 405 to a BBQ at Los Encinos Historical Park in Encino. The BBQ will feature great food and drink, live music by Ronnie's former bandmates and friends, raffle prizes, live auction and much more! BBQ-only tickets available to non-riders.

BBQ included for registered riders and passengers. BBQ-only tickets for non-riders are available for advance purchase. Please note: event is subject to sell-out and tickets may not be available at the door. Avoid disappointment and purchase your tickets in advance! 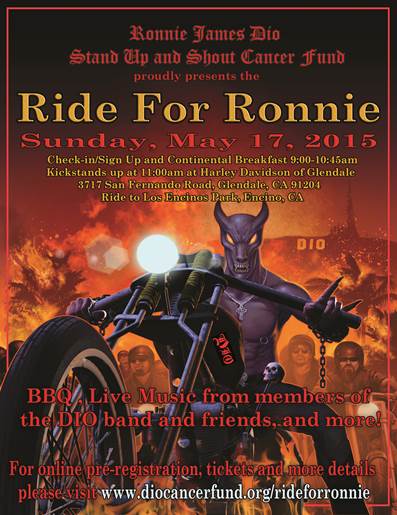