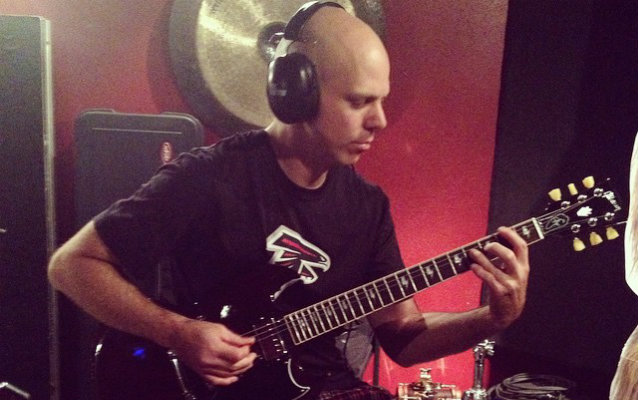 STONE SOUR has entered a Burbank, California studio to begin recording a covers album for a tentative early 2015 release. No further details are currently available.

On STONE SOUR's recent North American tour, the band treated fans to a different cover song every night. Among the tracks STONE SOUR performed during the trek were METALLICA's "Creeping Death", KISS' "Love Gun", JUDAS PRIEST's "Heading Out To The Highway" and PETER GABRIEL's "In Your Eyes".

Former STONE SOUR guitarist Jim Root told Australia's Music Feeds that he was fired from the group late last year via a phone call and is still not sure why he was dismissed in the first place. Root revealed, "I still haven't talked to certain guys in [STONE SOUR], so I really don't know what they were thinking or a hundred percent of the reason why they made the decision that they made," he said. "I mean, it was basically put to me over a phone call and I thought that was pretty lame. Whatever, it is what it is. Onward and upward. I think I have a little bit of a different opinion on how music should be done anyway."

Root played on all five STONE SOUR albums to date, including the recent double record set, "House Of Gold And Bones", which was released in two parts in 2012 and 2013.

He was let go as he sat out the band's last tour in order to start work on the next album from SLIPKNOT, of which he is also a member.

Root recently told Revolver magazine, "It became apparent to me near the end of the album cycle for 'House Of Gold & Bones' that it had basically run its course. But the band kept pushing for more dates, and I was just, like, 'It's time to stop!'"

Root was given his walking papers from STONE SOUR in November 2013. He still continues to work with frontman Corey Taylor in SLIPKNOT, for which Taylor also handles lead vocals.

Taylor recently said that the situation "put a strain between he and I for a little bit," but that working on a new SLIPKNOT album together helped mend the fences between them.