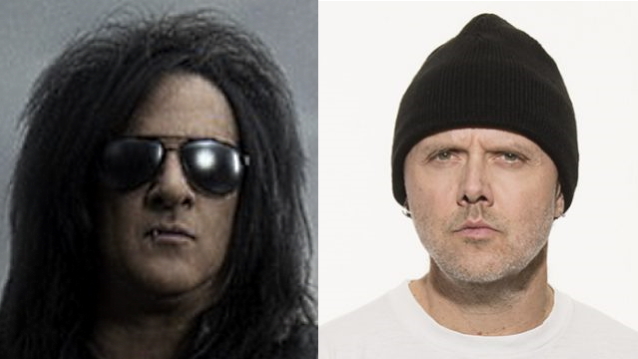 In a recent interview with "I Ask No One With Kevin Re LoVullo", Billy Idol's longtime guitarist Steve Stevens offered his opinion on METALLICA, both in terms of the band's musicianship and its influence on the heavy metal genre as a whole. He said (as transcribed by BLABBERMOUTH.NET): "I think they're the next generation's BLACK SABBATH, as far as what they contributed and their impact and their uniqueness and willingness to do what was not the norm. And that's always the way you get the greats, as people go, 'Yeah, we're not gonna do it the way it's been done before.' And James's [Hetfield] riffs…

"Sometimes people say, 'Well, Lars [Ulrich] is not the most technical drummer.' But the thing is great drummers write great parts. There's two ways to go — you can concentrate on the technical ability and keep a straight beat, or whatever, but then there's a guy like Lars who really, obviously, is a co-writer. But he's really listening to what James is doing, and he's translating those guitar parts to the drums and orchestrating them. And I think that's what makes a great drummer, because some of those drum parts, they're really inventive. I happen to think he's a great drummer — for that reason. And he's also a band leader that brought that band to incredible heights."

Steve added: "So, man, I've got nothing but respect for those guys — every one of them. And I knew [bassist] Robert Trujillo, I had jammed with before, and he's a monster. When he joined the band, it was, like, 'Okay, they got the right guy.'"

Ulrich spoke about his unique way of playing drums in a 2018 interview with Polar Music Prize. He stated at the time: "To me, it's always about the song and the band first. And the drums, or the guitars, or whatever else is going on, is just part of the big picture. So what you always have to do is you have to check your ego at the door and do what's best for the song, for the music, for the overall sound.

"What's always the most interesting to me about drumming is how do you fit the drums into what else is going on?" he continued. "How does it work [with] accents and special hits and kind of things that make it more rhythmic or more dynamic or just add a kind of a physicality to it?

"As much as I grew up on people like Ian Paice from DEEP PURPLE, who obviously has a lot of ability, I also love people like Phil Rudd [AC/DC] and Charlie Watts [THE ROLLING STONES], who [have] certainly ability, but, I think, to a lot of purists, maybe not so much, because they're not as technical," Lars added. "But they have a different kind of ability that, to me, is as valuable and as precious and as important in that they make it swing, they make it move, it gives it that physicality that it needs.

"I've always just looked at drums as more of a group instrument. I've never been very interested in playing drums by myself — you know, sitting down in a basement, practicing drum solos for hours at a time, that's not my thing. So being in a band, writing songs, making records, being part of a gang, being part of a band, that's always fascinated me."

Asked in a 2008 interview with U.K.'s Rhythm magazine if he was troubled by the fact that he's gotten a lot of flak over the years from people who accused him of being a poor drummer, Lars said: "It used to, back in the day — and I spent a lot of time overcompensating for that on the early records. But then you wake up one day and you're like, whatever. It hasn't bothered me for about 15 years. I'm no Joey Jordison, I'm no Mike Portnoy, and I have nothing but love and respect and admiration for all those guys. When I hear some of the young dudes, they blow my mind with what they can do with their feet and stuff — but it's not something that makes me go, 'I need to feel better about myself so I'm gonna learn how to do what they do with my feet.' I'm not a particularly accomplished drummer but I am very, very, very good at understanding the role of the drums next to James Hetfield's rhythm guitar. I guarantee you I'm the best guy in the world for that, and that's enough for me."