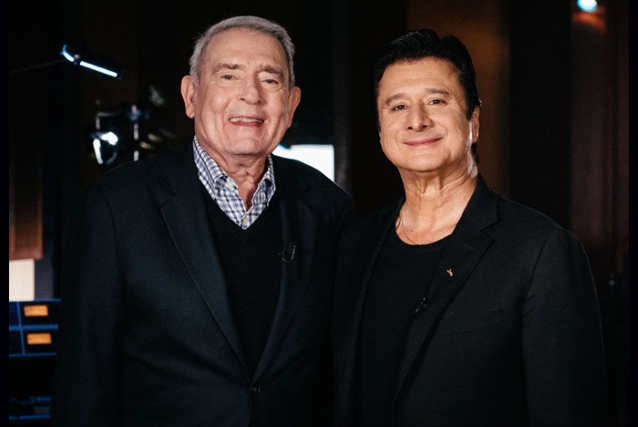 AXS TV has announced that the popular celebrity sit-down series "The Big Interview" has been given the greenlight for a seventh season, premiering in a new timeslot on Tuesday, April 16 at 8 p.m. ET. The upcoming season, hosted by veteran TV journalist and host Dan Rather, will feature 10 all-new episodes with some of entertainment's most influential artists in its first cycle of shows this season.

Season seven puts the spotlight on a roster of superstars from across the entertainment spectrum who join with Rather each week to candidly discuss their lives, legacies, and incredible careers. The season kicks off with a rare sit-down with rock superstar — and former JOURNEY singer— Steve Perry, who talks about his decision to leave the band at the peak of their success, a decision that was brought on by the overwhelming feeling that the passion for music had left him in the first-look clip below. He explains, "I could not find the honest passion for singing… and then, I think, my voice was also suffering." Perry continues, "Eventually, the feeling just got very clear to me that I need to just stop." Also during the interview, Perry reflects on growing up as a child of divorce and the impact it had on him, examines the highs and lows of fame, and opens up about his personal life offstage.

"I'm incredibly proud to see 'The Big Interview' returning for season seven," Rather said. "It has been my honor to sit down with these entertainment trailblazers every week, as they welcome me — and viewers across the world — into their personal lives. Hitting our 100th episode last season was truly a landmark moment, but it was only the beginning. I look forward to what the future has in store as we continue to build upon that success."

"'The Big Interview' has strongly resonated with our viewers, and Dan Rather is a major reason for that," said Evan Haiman, vice president of music programming and production at AXS TV. "He has a unique ability to get larger-than-life figures to open up in a deeply personal way, showing viewers a side of these icons that they don't usually get to see. Season seven continues that proud legacy, offering up even more of the legendary guests and in-depth discussions that have come to define the series throughout the years."