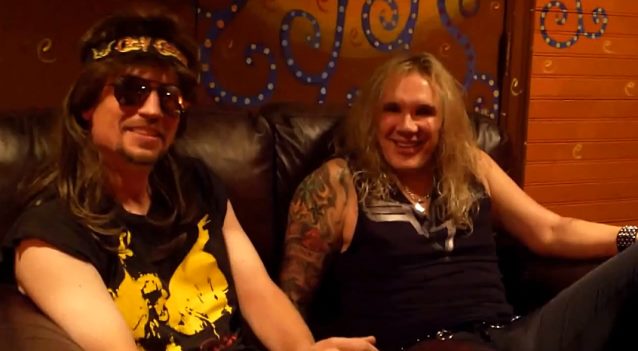 The Dude from 106.5 KWHL conducted an interview with vocalist Michael Starr of Los Angeles glam-metal jokesters STEEL PANTHER before their August 31 show at the House Of Blues in Las Vegas, Nevada. You can now watch the chat below.

STEEL PANTHER has set "All You Can Eat" as the title of its third album, tentatively due in early 2014. A video for the song "Party Like It's The End Of The World" is being filmed this month.

Regarding the new CD title, Starr said: "We feel like STEEL PANTHER is like a buffet. You know what I mean?! There's a little bit of everything for everybody. And you can have as much of us as you want."

Regarding naysayers that say STEEL PANTHER is a joke-metal band, Zadinia said: "Listen to our record and tell us that our songs aren't better than most of the bands out there. How funny is that? At the end of the day, it comes down to the songs. I think our songs — without sounding egotistical — I think our songs are great. When you hear the hooks in our songs, you hear the playing and you hear the vocals, you throw that up against any band in any era, and I think it stands up."