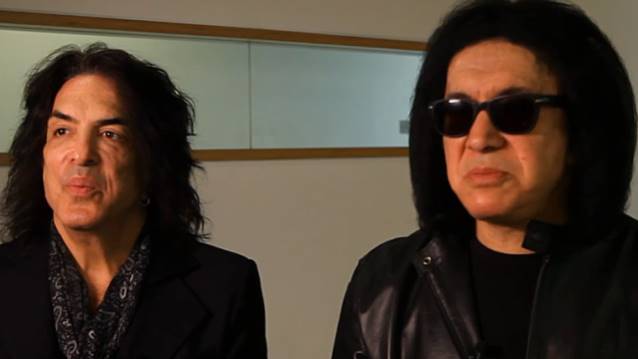 KISS members Paul Stanley and Gene Simmons recently spoke to USA Today about their upcoming induction into the Rock And Roll Hall Of Fame. You can now watch the report at this location.

Stanley: "When we broached the subject, they told us it was a non-starter. That's arrogance coming from pencil-pushers. We're the people wearing the guitars. The arrogance went further when they tried to strong-arm us into having the original lineup play in makeup… Not surprisingly, [our refusal to perform with the original lineup in makeup] ruffled their feathers because the Rock Hall seems to think the tail wags the dog. This dog doesn't roll over for anybody."

On why they didn't want to only perform with the original lineup at the Rock Hall ceremony:

Stanley: "We can only wear those uniforms with pride. We're not going to risk tarnishing what we've built for 40 years just to satisfy someone's penchant for nostalgia."

Simmons: "Ace and Peter were important in the formation of the band. We said, 'Let's have everybody come out and play.' They said no."

On how it feels to finally be inducted into the Rock Hall:

Stanley: "[The Rock Hall] dodged this bullet for a long time. We're the bitter pill they finally had to swallow. They bowed to public pressure as the years went on and it became absurd to ignore the big elephant in the room."

Simmons: "Our happiness and self-esteem don't depend on the Rock Hall or any entity. The fans empower us. We've been in the hall of fame since we began. Our fans put us there."

On why they are choosing to even attend the ceremony:

Stanley: "It means a lot to the fans. There's a validation they craved for the band. Our gratification comes from knowing the audience is thrilled that we're getting in."