SOULFLY will embark on "The Summoning" North American tour in February. Kicking off on February 1 at the Marquee Theater in Tempe Arizona, the trek will make stops in Portland, Toronto, and New Orleans before ending on March 12 at the Warehouse Live in Houston, Texas. Direct support on the tour will come from TOXIC HOLOCAUST and X-METHOD, with MADZILLA, SKINFLINT and SYSTEMHOUSE 33 joining in on select dates.

Vocalist/guitarist Max Cavalera comments, "The ritual continues! We are summoning our tribe to rage across North America!!".

Confirmed dates for "The Summoning" North American tour are:

Max Cavalera told PureGrainAudio about "Ritual": "I know musicians [always] say their new record is their favorite, but [this new] SOULFLY [album] really hits home, man, because it's got a little of everything that I really love about SOULFLY. It's got some of the tribal elements back in the groove, and it's got a lot of fast stuff. It's almost like a 'tribal thrash' record, which is kind of… it's never been done before. So it's a real political and spiritual [album mixed] with tribal [and] thrash [sounds]. The tribal grooves go right in hand with fast thrash, death metal stuff. So it's pretty cool, man. I think people are gonna be turned up when they hear the new SOULFLY." 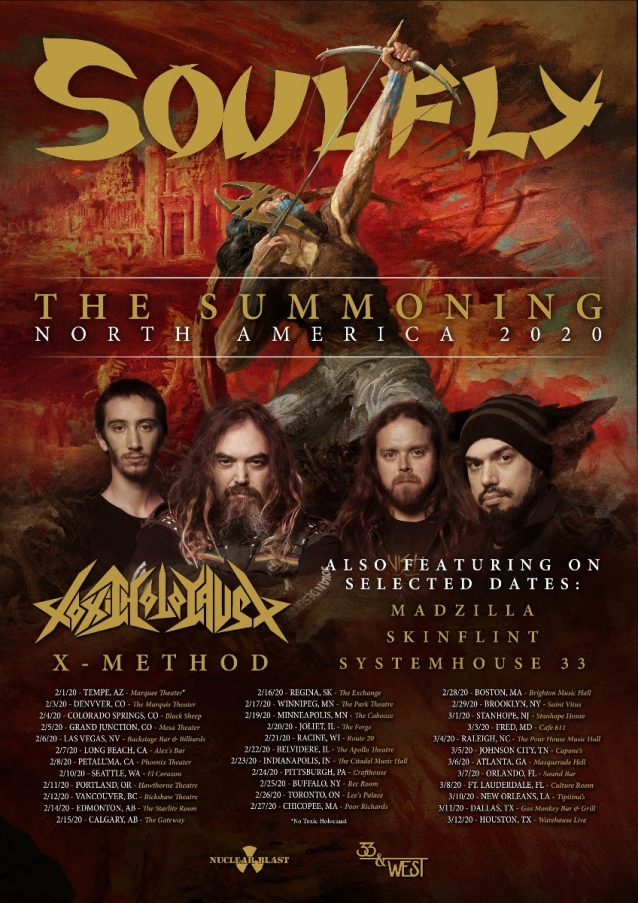