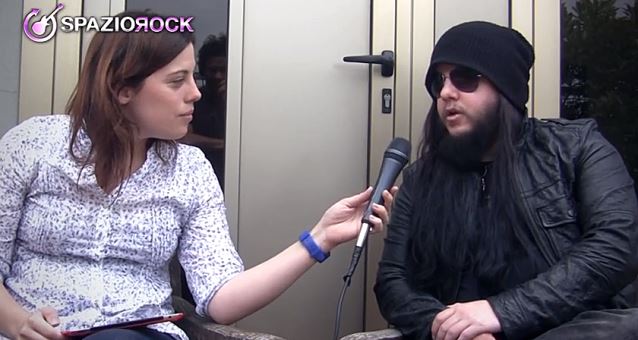 Italy's SpazioRock recently conducted an interview with SLIPKNOT drummer Joey Jordison about his SCAR THE MARTYR project. You can now watch the chat below.

The self-titled debut album from SCAR THE MARTYR will be released on October 1 via Roadrunner Records.

Recorded at Sound Farm Studios in Des Moines, Iowa, SCAR THE MARTYR's CD was helmed by Rhys Fulber, whose production and mixing credits include FEAR FACTORY, ROB ZOMBIE, MINDLESS SELF INDULGENCE, FRONT LINE ASSEMBLY and more. The album was written by Joey and lead vocalist Henry Derek Bonner (BLOOD PROMISE), and joining them in the studio were keyboardist Chris Vrenna (NINE INCH NAILS), as well as Simon and Norris, who collectively handled all lead guitars on the album.

SCAR THE MARTYR was recently on the road as the support act for DANZIG on a North American tour which also included performances by former MISFITS guitarist Doyle Wolfgang Von Frankenstein and HUNTRESS. The trek kicked off August 9 at Sound Academy in Toronto, Ontario, Canada and wrapped up on August 31 at Tempe, Arizona's Marquee Theatre.

"With this project, I focused my efforts on writing for the better of the song," said Jordison. "I wasn't worried about flash or persona... It's all about writing a good solid song. I'm writing music that people can grasp and hold on to...something that resonates. If you don't have that, then you have nothing."

"I'd been working on new SLIPKNOT material since the end of the 'All Hope Is Gone' tour cycle, but I ended up with so much stuff I had to take a step back and stop working on it," he explained to Metal Hammer magazine. "The time wasn't right. But I came up with a bunch of material that was really killer and heavy and started taking some of it in a different direction. I started focusing on a lot of the post-punk and industrial stuff that I've always loved and started putting super heavy and brutal guitars over the top of it. That's how it started. It's taken me a couple of years to get to this point, but I can honestly say this is the most satisfied I've ever been in the studio. I can't wait for everyone to hear this shit."