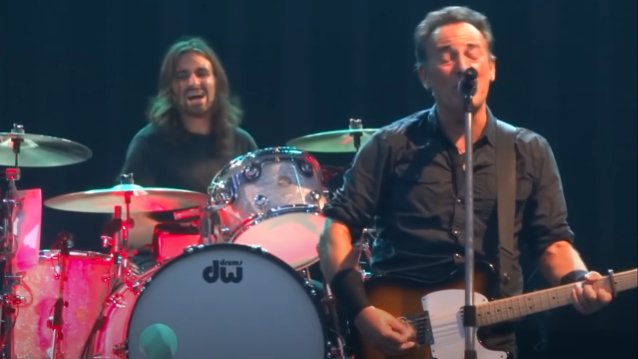 In a new interview with the "Spittin' Chiclets" podcast, SLIPKNOT's Jay Weinberg reflected on being asked to fill in for his dad as the touring drummer for BRUCE SPRINGSTEEN & THE E STREET BAND more than a decade ago.

He said: "That was completely insane. And I didn't expect for that to happen, but the stars aligned in that way that just like it was one of those 'right places at the right time' kind of things.

"I was the last kid of all the people in [THE E STREET BAND]," he continued. "After the band had kind of split up in '88, all the guys in the band had kids and went on to do other things. Then they got back together in '99, and the kids in the band — my sister, actually, included; she got up a couple of times and played keyboards with them — and all the kids had kind of gotten up and played the guitar and stuff like that. I was the last one who had never gotten on stage to do anything, 'cause I was deathly afraid of it. If I was messing up on the drums, you can't just pull me down in the mix and stuff; it'd be catastrophic.

"I had finished high school, and that summer [of 2008], they were playing some shows at Giants Stadium in New Jersey," Jay said. "It was the old Giants Stadium, before they tore it down and built a new one. And so my dad was, like, 'Oh, you should play a song with us at soundcheck.' And so I did. And Bruce was, like, 'Hey, that was pretty good. Why don't you play that tonight during the show?' And so I was just so nervous, but I wanted to do it and wanted to kind of rise to that occasion and be, like, 'All right. You can do it once and then you never have to do it again. You can say you did it.' So I played the song 'Born To Run' with them that night, and it went great. So I could just rest my cap on that, and that was it. But then, a couple of months later, they had this scheduling conflict where the late-night 'Conan' program [where Max served as the bandleader], everybody was moving out to California and it was gonna become 'The Tonight Show'. And the show was gonna be an hour earlier, and they were gonna taping in California. It was a really big change for the show, and so my dad had to be there for the start of that show — I think the first show was gonna be, like, June 1st of that year. Bruce had coincidentally booked a European tour to start May 31st, so my dad, all of a sudden, had to be in two places at once. And so they kind of got together and said, 'Hey, we've gotta figure out what we're gonna do when you have to go to the TV show and we need somebody onstage.'

"I've known all these people since I was a child — these are all my uncles: Steve and Garry and Clarence [and] Danny, of course. Now Danny passed. But this is like my extended my family, and I think Bruce asked my dad more as a dad and not necessarily of BRUCE SPRINGSTEEN & THE E STREET BAND Bruce. Like, 'Do you think Jay would wanna do that? Do you think he'd crack under that pressure?' And I think my dad was, like, 'I don't know. We're gonna find out.'

"So, yeah, I remember Bruce called me and asked if I would like to. And I couldn't believe it, but he basically then just kind of sent me a list of, like, 'All right. Get started on learning these couple of hundred songs, and we'll go from there, and we'll add on to it from there.' And that's what we did. For about a year, I was filling in for my dad in that way."

Jay also reflected in more detail on his first performance with Springsteen, which took place in August 2008 at Giants Stadium.

"That was like total 'fight or flight' kind of moment — everything just goes numb," he said. "You just have to turn off and let your subconscious roll with it. And I had only been playing drums for three years at that point, too. So it was a huge, huge pressure, but I kind of just blacked out and played it, and then, at the end, when it was over, I couldn't believe that that had happened. And it went well. I could have believed it if it had been total shit. But it did go well. We played the song, and I think people enjoyed it. But, yeah, it was like 70 thousand people or something like that. It didn't look real — it looked like I was looking into a TV screen or something like that. I think that kind of helped — it was so ridiculous to look at that I don't think I could even process that it was a thing that was actually happening."

Jay discovered SLIPKNOT when he was a pre-teen, through his father. He was hooked immediately and was a huge fan of SLIPKNOT by the time he was invited to Los Angeles to try out as replacement for Joey Jordison in 2014.