With NINE INCH NAILS cancelling all 2021 tour dates, including this year's Riot Fest, the festival is unveiling a wave of announcements bound to excite anyone planning on attending. In addition to three major headliner additions, festival organizers are announcing a second batch of Riot Fest Late Night shows this Friday, September 20, which will go on sale later that day.

Anyone who purchased a three-day or single-day Sunday ticket will now gain access to the festival's Preview Party on Thursday, September 16, free of charge. Performing Thursday will be Morrissey, who will curate a selection of special guests to perform exclusively on Thursday. Plentiful vegetarian options will be offered by food vendors; Morrissey's tradition of no-meat at performances will be honored across Douglass Park for the entire day on Thursday, September 16. On Sunday, September 19, SLIPKNOT will close the night out on the Riot Stage, bringing one of the most iconic metal acts ever to Riot Fest for the first time.

Tickets for the Riot Fest Thursday Preview Party have, until now, only been available to those who kept their 2020 tickets for 2021; in a move benefiting local Chicago charities, tickets for Thursday will go on sale today at 12:00 p.m. CST, with all proceeds benefiting the Chicago Coalition for the Homeless (additional charities to be announced).

"I got so excited putting together this Thursday lineup… we've never done anything like this before," festival founder Michael Petryshyn shared. "So we wanted to open the gates to everyone in a fair way, while still respecting our loyal fans who received free Thursday passes for keeping their tickets through thick and thin. Giving Thursday's ticket proceeds back to our Chicago community feels like the perfect win-win scenario. It makes our Thursday Preview Party feel extra special: it's now a gift to our whole community, whether you're there or not."

These additions join a jam-packed lineup that includes SMASHING PUMPKINS, COHEED AND CAMBRIA, Lupe Fiasco, RUN THE JEWELS, FAITH NO MORE, DROPKICK MURPHYS, PIXIES, Machine Gun Kelly, DEVO, MR. BUNGLE and a plethora of bands spanning genres. A limited number of single-day tickets are on sale now; refunds for Sunday ticket holders will be available for a short period of time, if they choose to not hold onto their ticket and gain Preview Party access. 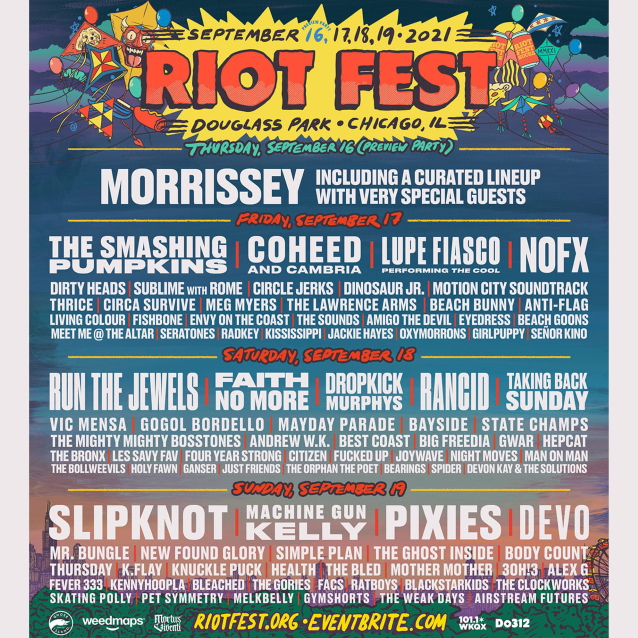