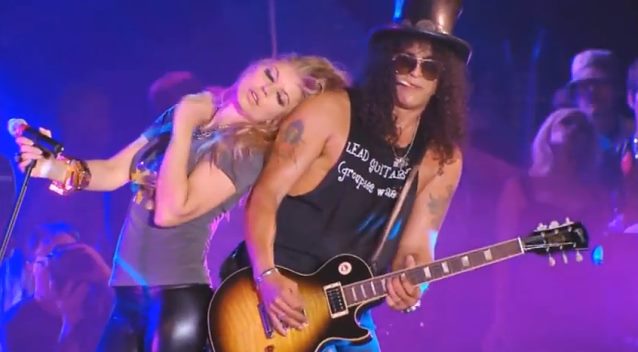 The Pulse Of Radio reports: Although Slash and BLACK EYED PEAS singer Fergie became good friends after collaborating on a song for Slash's first solo album, when it came time to name her new baby with husband Josh Duhamel, Fergie went with the first name of Slash's former GUNS N' ROSES bandmate, Axl Rose. Were Slash's feelings hurt at all? Asked by TMZ what he thought of Fergie calling her son Axl, Slash said, "I think it's really cool, I actually talked to [Fergie and Josh] yesterday. It's all good . . . who am I to judge?"

Slash told The Pulse Of Radio a while back how he first met Fergie and what he thought of her. "I did a BLACK EYED PEAS fundraiser called Peapod, and she showed up. I'd never met her before, and I was expecting, really, I thought, a Puerto Rican girl, 'cause of the way that her songs sort of sound. And so here's this white girl from Orange County and that really sort of surprised me. And then we started doing this LED ZEPPELIN song and she jumped on the vocal and it just blew my mind."

Fergie and Slash ended up recording a song called "Beautiful Dangerous" for his 2010 solo debut as well as a cover of GUNS N' ROSES' "Paradise City" that ended up as a Japanese B-side.

Slash has been working on material for his third solo outing, but is also currently doing press for "Nothing Left To Fear", the first horror film produced under his Slasher Films banner.

In addition to producing, Slash scored the film and wrote two original songs for it, with vocalist Myles Kennedy from his band singing on one of them.

"Nothing Left To Fear" opens in limited theatrical release on October 4, and hits VOD and DVD on October 8.