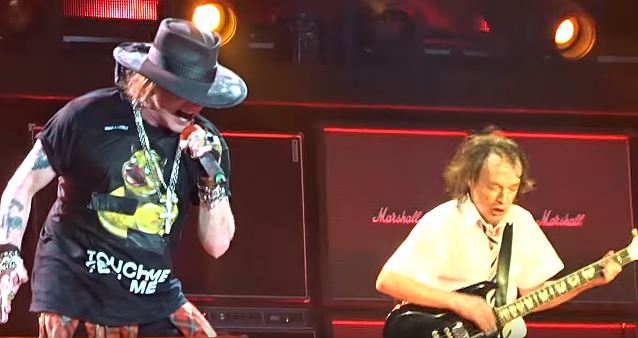 AC/DC became the first band to perform a major concert at The Stadium at London, England's Queen Elizabeth's Olympic Park. The concert, which took place Saturday night (June 4), was the first major event in the stadium after the transformation works were completed. The stadium had been undergoing work since 2013 to turn it into a year-round, multi-use venue. The work included installing the largest roof of its kind in the world, a community track, innovative retractable seating, spectator and hospitality facilities and external landscaping.

The veteran rockers are still being fronted by GUNS N' ROSES singer Axl Rose, who was no longer confined to the chair he had been seated on ever since breaking his foot during a surprise GUNS club show in April 1 in Los Angeles.

Axl's GUNS N' ROSES bandmates Slash and Duff McKagan were in attendance at last night's concert and seemed to be having a good time, with the latter describing the show on Twitter as "simply an epic experience!"

AC/DC has three shows left to go on the European leg and has now finalized the ten rescheduled North American dates it will play later this summer — after Axl finishes his stadium trek with GUNS N' ROSES.

AC/DC last week released a new video interview in which guitarist Angus Young and bassist Cliff Williams discussed the shows they're doing with Axl, pointing out that he's led the group to change up its setlist more than usual. Young explained: "With Axl, we've been able to mix up quite a few songs, do a few older ones and put them, which we haven't done in a number of years. We always used to kind of get a setlist, and that would be (it) for a tour. So now we've got a lot more adding and putting in different tracks, and the fun part is when we get there on the stage, and seeing it come to life in front of the audience and seeing the reaction."

Among the rarities the band has broken out on the current European run are "Riff Raff", "Rock 'N' Roll Damnation", "Touch Too Much" and "If You Want Blood (You've Got It)".

Rose recently indicated that he's willing to continue with AC/DC past the 22 shows he's contracted for.