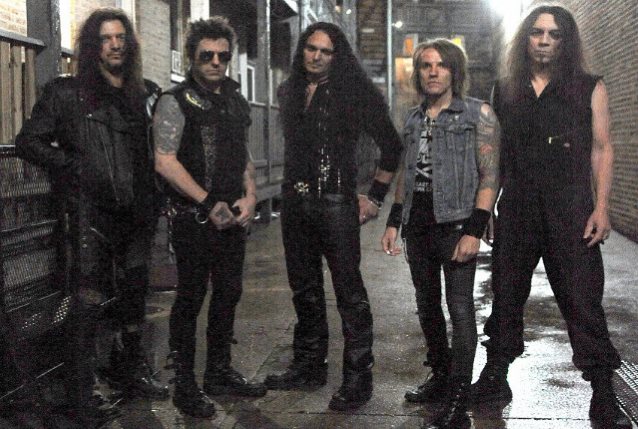 SKID ROW will enter the studio at the end of next month to begin recording its first new music since 2014's "Rise Of The Damnation Army - United World Rebellion: Chapter Two" EP. The effort will mark the band's first release with the South African-born, British-based vocalist ZP Theart (DRAGONFORCE, TANK, I AM I), who joined SKID ROW in December 2015.

SKID ROW guitarist Scotti Hill told EVH Gear Discussion at this past weekend's NAMM show in Anaheim, California (see video below): "We're getting ready to go back in the studio with the band. We have a new singer, ZP Theart. People would know him from the band DRAGONFORCE. And he is a brother, and he's a great singer; he sounds great with us. And we'll be starting some recording in the end of February."

Despite having played sporadic shows with SKID ROW for a year, Theart wasn't officially announced as the band's new frontman until earlier this month.

Theart said in a statement: "[SKID ROW's] music was the soundtrack to the largest part of my younger years and many a crazy adventure. Now I get the chance to re-live all of them for a hour and a half every night! I am beyond honored to be given this opportunity. Think I'm a bit jealous of my actual self."

Theart's involvement with SKID ROW was exclusively reported by BLABBERMOUTH.NET on December 31, 2015. He stepped into the group following the departure of Tony Harnell, the TNT frontman who joined SKID ROW in April 2015 as the replacement for Johnny Solinger, the band's singer for fifteen years.

SKID ROW guitarist Dave "Snake" Sabo told News-Press.com that Theart has been doing a great job on the road.

"He's come in," the guitarist said, "and he's a really great source of positive energy. He knew all of our songs coming in, and he knew them well. He started singing the crap out of all of them, and we were all very impressed."

Former SKID ROW singer Sebastian Bach claimed in some recent interviews that his manager had been in talks with the band's manager about a reunion but that those conversations suddenly stopped. He told Vanyaland in December: "I don't know really why, but it's taken a turn in the other direction, unfortunately. I'm really so busy that it's beyond comprehension. I would love to do that, but if it doesn't happen, I've got a lot of other things on my plate to tackle. So whatever happens, happens, but it's not even up to me whatsoever at all — it has nothing to do with me — it's just me. [Laughs]"