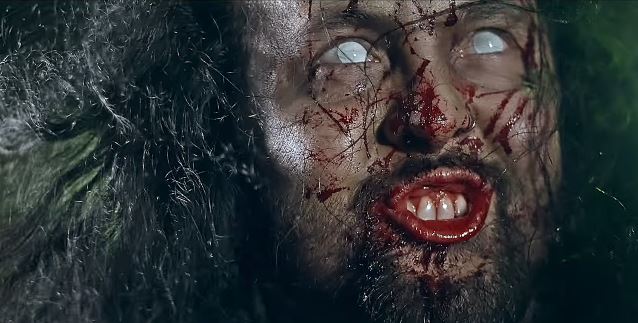 "Splendor And Agony", the new video from from SINSAENUM, the project featuring Frédéric Leclercq, virtuoso bass player of London-based power metallers DRAGONFORCE, and Joey Jordison, formerly of SLIPKNOT and currently of VIMIC, can be seen below.

Leclercq stated about the clip: "This is the video I've always wanted to make.

"We had a great team called Independent Film and they understood the vision I had.

"The song is brutal and I wanted to incorporate elements of horror movies, which I love, too!

"I'm so happy with the result; we all are! It's beyond our expectations.

"The location was perfect, the makeup artists did an amazing job, and the filming process was intense.

"Some of us slept very little so it was easy to 'get into it.'

"One thing about the contact lenses: we couldn't see shit with them. So we were really blind in a hot steamy factory, covered in blood, with death metal blasting through the PA — perfect!"

The end result is titled "Echoes Of The Tortured" and was mixed in Fascination Street Studios in Örebro, Sweden, where Jens Bogren (OPETH, KREATOR, DEVIN TOWNSEND) put the finishing touches to 21 tracks that are — in one word — expansive.

"Echoes Of The Tortured" will be released via earMUSIC on July 29.

Jordison's other band called VIMIC will release its debut album, "Open Your Omen", later in the year via Roadrunner Records. Joey is joined in that group by singer Kalen Chase Musmecci, who has toured with KORN as a backing vocalist and percussionist, and Joey's former SCAR THE MARTYR bandmates Jed Simon (guitar), Kyle Konkiel (bass) and Matthew Tarach (keyboards).