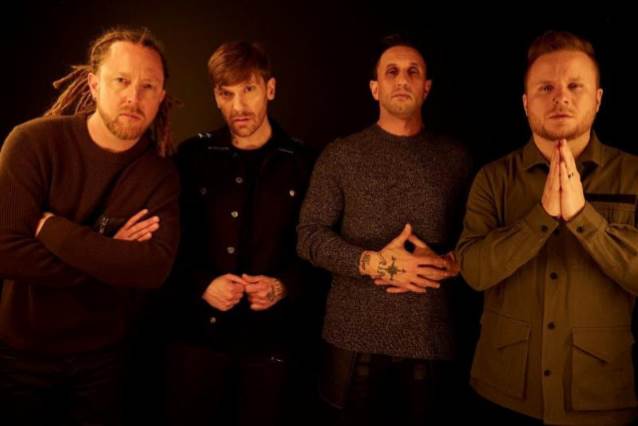 SHINEDOWN's new single, "Get Up", has quickly found its way into the hearts and minds of many people and for good reason — the moving, uplifting track offers hope and encouragement in the face of personal struggles, whatever they may be. For frontman Brent Smith, the song was born out of watching his friend, SHINEDOWN bassist Eric Bass, deal with depression. Offering a light in a time of darkness, especially with mental health issues, is something Brent is deeply connected to after battling his own personal demons. While writing for the new album, "Attention Attention" — the first album he has written totally sober — he put pen to paper in the most open and honest creative place he's ever been, and a beautiful, universal song rooted in Brent and Eric's raw vulnerability took shape. Reaching far beyond any genre or label, "Get Up" speaks to the human spirit in a time of need, and it's a song that has already resonated with the masses — becoming a fan favorite at arena shows on tour where the crowd response is palpable, and racking up more than five million total streams totally organically. Today, the rock band releases the stunning, cinematic video for "Get Up", directed by Bill Yukich (Beyoncé's "Lemonade", Marilyn Manson, Wiz Khalifa).

"Attention Attention" was released May 4 via Atlantic Records. The follow-up to 2015's "Threat To Survival" marks SHINEDOWN's first full-length effort to be produced entirely by Bass.

"Eric probably got 100 or so gray hairs from producing the album," SHINEDOWN drummer Barry Kerch told the Lexington Herald-Leader. "He put a lot of pressure on himself and we put a lot on pressure on him. A lot of people say it’s the death knell when you self-produce. But he knew how to do the job. He's produced bands before, many different styles of bands — rock 'n' roll bands, metal bands. So we had full faith and trust in him. But we also had full faith and trust in each other because we still get along. We still like each other. We still have fun together. We're friends, and we love each other like brothers. That made it a lot easier. For me, it was fun just to watch him work with the talent that he had."

SHINEDOWN is on the road this summer for a co-headlining U.S. tour with GODSMACK. The band recently announced a European headlining tour, set to kick off October 29, with tickets going on sale this week.