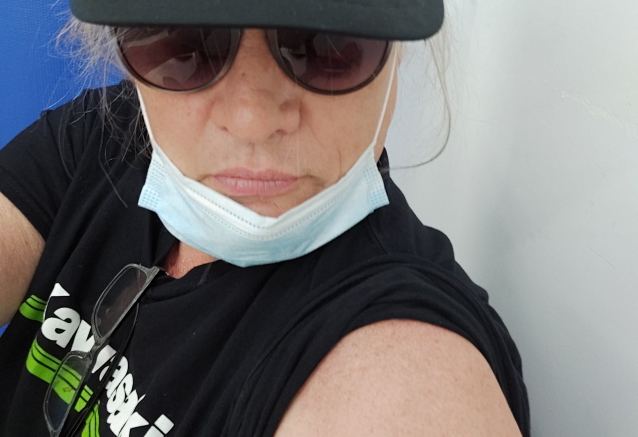 The 53-year-old former SKID ROW singer shared that he got the shot in a tweet earlier today.

"Got the shot Ready to ROCK!!" he wrote in a caption accompanying a picture of him after getting the vaccine.

"Every one of you who calls yourself a rock fan go get the vaccine and a vaccine passport so we can get this show on the road again mother truckers!

So far, 96 million Americans — nearly 30% — have received at least one dose of the three vaccines, according to the Centers for Disease Control and Prevention.

A Pew Research Center survey in late February found that 69% of Americans either have already been vaccinated or plan to be vaccinated.

Although the COVID-19 vaccine was produced quickly because of the urgency of the health crisis and the number of clinical trial volunteers, scientists say the vaccine was not rushed, and it relies on years of research.

The nation's top infectious disease expert, Dr. Anthony Fauci, has estimated that about 70-85% of Americans would need to be vaccinated to reach herd immunity.

America's two main vaccines have shown 95% efficacy against the coronavirus.

Johnson & Johnson's vaccine, which became available in the United States last month after the U.S. Food and Drug Administration gave it emergency use authorization, was tested with new variants of COVID-19, and has shown to be effective against them; Pfizer and Moderna were tested prior to the emergence of these variants.

Got the shot ? Ready to ROCK!! every one of you who calls yourself a rock fan go get the vaccine and a vaccine passport so we can get this show on the road again mother truckers! Thank you @POTUS #ScienceKnows ?? #AMERICAISBACK ? for #rocknrollhttps://t.co/TQZrdaqKzs pic.twitter.com/R7igGBLpKZ

HELL YEAH! Getting my second shot next week! https://t.co/VEJNiuvajj