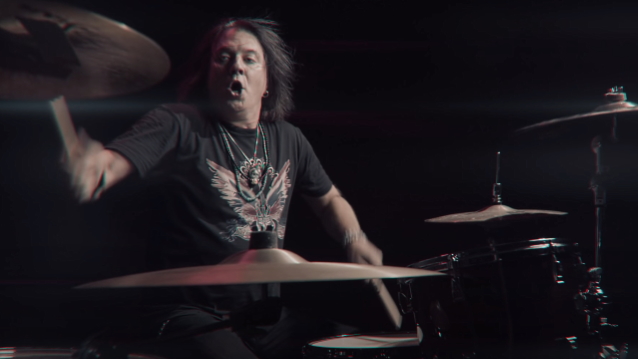 Former L.A. GUNS drummer Scot Coogan has accused singer Phil Lewis of "conjuring up" a reason for his exit from the group.

Last month, Lewis told Metal Rules that Coogan quit L.A. GUNS because he "didn't have a studio" where he could lay down the drum tracks for the band's new album, "Checkered Past", resulting in L.A. GUNS' decision to enlist longtime engineer Adam Hamilton to play on the record instead.

Coogan, a veteran session drummer who has also played with Ace Frehley, LYNCH MOB and Lita Ford, addressed his departure from L.A. GUNS in an interview with "This That & The Other With Troy Patrick Farrell". Asked if it's true that he left L.A. GUNS because he was upset that he didn't play on the band's new album, Scot said (as transcribed by BLABBERMOUTH.NET): "No. [Laughs] Not at all. I think that's something that they conjured up, maybe through management. I never once said to Phil Lewis that I was upset about not playing on the record. Tracii [Guns, L.A. GUNS guitarist] and I talked about it, and I said, 'I can. I can get a studio. And this is how much I will charge to do the tracks.' And they decided not to do that. Because I'm not a bandmember — I'm a hired gun — so if I'm gonna record, I'm gonna charge my rate. And they didn't want to do that. So they just decided to have Adam do everything. I could have gotten into a studio. Do you know how many records I've done. And I'm not upset that I didn't play on an L.A. GUNS record — I never said that once. So that's something they conjured up."

He continued: "I didn't respond to [Phil's comments earlier] because I'm taking the high road, and I don't wanna cause any problems. I've been playing with Tracii for years in different bands and everything. But I never said that once. And then I went and did the two videos [in support of 'Checkered Past']. If I was upset about not playing on the record, why would I do the videos? [Laughs] It doesn't make any sense.

"So, no, that never was mentioned at all," he reiterated. "But that's what they came up with and that's what they said. And I'm, like, 'Well, that's fine.' They could have made up something worse. [Laughs] And Phil did say some nice things; he said, 'We took a big hit.'"

As for the real reason he left L.A. GUNS, Coogan said: "To be honest, the reason I made that decision is because I have moved on. I enjoy playing with Tiffany and Stephen Pearcy. And there was confusion about these dates that came up with L.A. GUNS. Because I was told we weren't gonna tour until New Year's. And so I had dates planned. And then they said, 'Oh, you have to do these shows.' And I said, 'I can't.' So there was all that. And then the way that that was handled — I'm not gonna say any names or anything, but the way it was handled, I just got a real bad taste in my mouth. And I said, 'You know what, guys? I'm gonna bow out and do what I'm doing now,' which is the Tiffany band and Stephen Pearcy. And I'm very happy — I'm very healthy and happy doing those two gigs right now. And I didn't want to go back and have things be weird with L.A. GUNS. So I just decided to quit."

He continued: "I told them [I was leaving] in plenty of time to get somebody [else]; it was, like, a month and a half or almost two months before. I figured this new record's coming out, and feeling the way that I was feeling about business things and stuff with the band, I decided that I should do that then. And it was a tough decision, because I love Tracii and I love Ace [Von Johnson, L.A. GUNS guitarist]. I was just texting with Ace Von Johnson. I'm out here with Johnny Martin [L.A. GUNS bassist]. It's, like, we're all family. So it was a tough decision, man — it was really tough. I was going back and forth with it. But with the business end of the way things were handled, I just decided to do it at that time before the new record comes out. And I'm in the videos now, but shit hadn't hit the fan at that point. [Laughs]"

Coogan played with Frehley for five years until 2012 when he left Ace's band to focus on other projects. He rejoined Frehley's group in 2014 and stayed with the guitarist for another four years before he was fired — along with guitarist Richie Scarlet and bassist Chris Wyse — and replaced with the musicians that played with KISS bassist/vocalist Gene Simmons on his solo dates.

Due on November 12 via Frontiers Music Srl, "Checkered Past" marks L.A. GUNS' third album since the 2016 reunion of the band's core members Lewis and Guns. It follows 2017's "The Missing Peace" and 2019's "The Devil You Know".