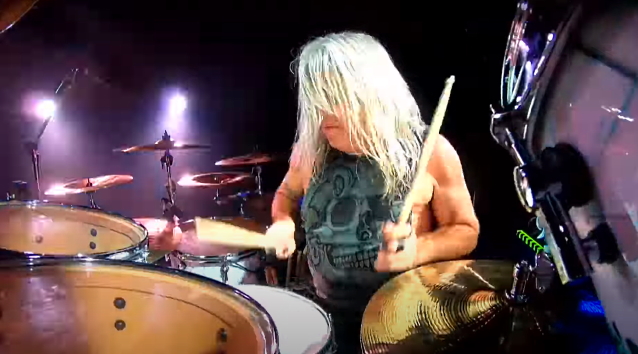 In celebration of drummer Mikkey Dee's 57th birthday, SCORPIONS have uploaded a professionally filmed video of one of his drum solos, filmed on tour with the hard rock legends. Check it out below.

In September 2016, the Swedish musician was named as a permanent replacement for SCORPIONS' longtime drummer James Kottak, who was dismissed from the band during his well-publicized his battle with alcoholism.

Dee, who spent almost 25 years as the drummer of MOTÖRHEAD, filled in for Kottak for a few months before being upgraded to the positon of a full-fledged member. In 2017, he spoke to the "Talking Metal" podcast about how the transition came about. "Overall, we clicked really right away — all of us together — and it sounded really good," he said. "I was filling in for James; he didn't feel good at that point, and he just needed some time off, I suppose. So that was about it. And then the guys decided to keep me. And I had nothing going at that point. So we just clicked. It just sounded right. And personally, we just liked it all. It was great. So here I am."

Dee admitted that joining a band like the SCORPIONS, which has been in existence for five decades, "is easy to get into but it's so hard to get into at the same time, because they have their routines, they have their way of working and the whole thing, and so do I. So either it clicks or it doesn't, on the personal level and on the musical level," he said. "But here we clicked right away, they loved what they heard and how I played, and so did I. And it was great for me to join a band and play something else as well."

Mikkey added: "After almost 25 years with MOTÖRHEAD, playing the same music, playing the same stuff and thinking that way as a drummer, it was a big, big challenge for me, and it was not easy — and it still isn't easy. These guys are very, very… They're great musicians, and they know what they want, they know how to sound, and I have to adjust myself at the same time as they really need to adjust to me. But I think we manage pretty good, and the result is a great, great live show. It's very tight, it's very heavy. I've heard some remarks about, 'Oh, back to the '70s,' kind of, and, 'Really powerful.' I'm giving it my best; I'm giving two hundred percent up there. So it's good."

Last week, Dee told "The MetalSucks Podcast" that SCORPIONS had "over 25 songs" written for their new album. The drummer and his bandmates recently regrouped to resume work on the effort, which is tentatively due in 2021.

The initial session for SCORPIONS' new LP are taking place at Peppermint Park Studios in Hannover, Germany. The disc will mark the German hard rock legends' first release since 2017's "Born To Touch Your Feelings - Best Of Rock Ballads", which was an anthology of SCORPIONS' new and classic material.

SCORPIONS originally intended to record the new album in Los Angeles with producer Greg Fidelman, whose previous credits include SLIPKNOT and METALLICA. However, because of the pandemic, most of the work so far has been done remotely, with Fidelman taking part via Zoom.