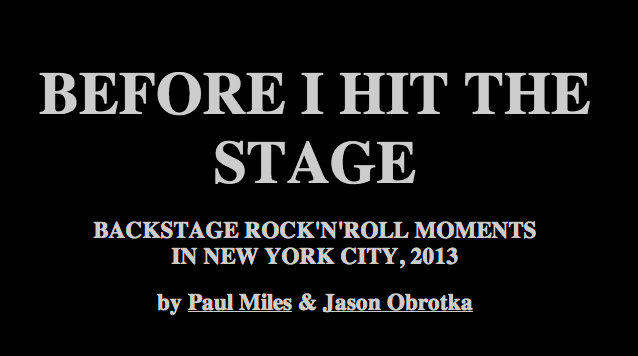 The book is set to become the first ever published that photographically documents touring rock 'n' roll bands and artists in a single city over the course of a year.

After assisting Neil Strauss on MÖTLEY CRÜE's best-seller "The Dirt", then having his own music entertainment book "Sex Tips from Rock Stars" released in multiple languages worldwide, author Paul Miles has collaborated with former GUNS N' ROSES tour photographer Jason Obrotka on this contemporary book that promises to takes readers behind the scenes as the stars get ready to rock one of the world's great cities.

The full list of bands and artists shot by Miles and Obrotka during 2013 for the book is:

Says Miles: "We're now going to see if we can land a worldwide publishing deal, hopefully with a publisher that really understands rock 'n' roll. If we can't find the right publisher to partner with, then we'll look to self-publish it and go direct to the fans of such hard rock, heavy metal and punk rock bands."

Anticipated in mid-2014, "Before I Hit The Stage" is expected to include hundreds of candid and insightful images from concert dressing rooms and hallways that captures the artists in the intimate moments before their performance, presented as a unique and compelling collection of pre-show rituals and backstage antics in New York City.