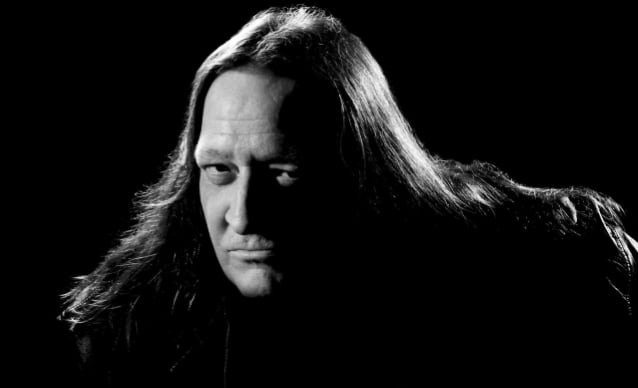 Jon Oliva, the American composer, multi-instrumentalist and singer who is best known as the founder of and keyboardist and lead vocalist for SAVATAGE, has revealed to "80's Glam Metalcast" that he battled COVID-19 for two months last year. "I had it for eight weeks, and I wouldn't have wished it on my worst enemy in the world," he said (as transcribed by BLABBERMOUTH.NET). "I would not have wished it on anybody. It was brutal — it really was. It sucked. But I'm okay now. And I'm gonna be getting my vaccination here in the next week or so. And that's it. So I lived through it. [Laughs] They don't want me in Heaven. Christ doesn't me up there because the first thing I'm doing when I get to Heaven is I'm punching Paul O'Neill [late TRANS-SIBERIAN ORCHESTRA founder and SAVATAGE collaborator] and Criss Oliva [late SAVATAGE guitarist and Jon's brother] in the face."

Oliva also addressed the possibility of new SAVATAGE music in the not-too-distant future, saying: "Since [SAVATAGE's] Wacken [reunion] show in 2015, Chris Caffery, me and Al Pitrelli, we've been trading song ideas for a possible SAVATAGE thing over the phone. I go, 'Hey, this is great. This is great. This is cool.' But I've been writing SAVATAGE material since 2003, and I could do a quadruple double album, if I wanted to. So, yeah, we're trading off things, and we're looking at that. And we're working on a SAVATAGE live thing that we did in Cologne, Germany in 1997, and we're putting that together for a livestream thing. And it's really good. And I've been working on that. Al came down to Florida and we kind of beefed it up a little bit — not a lot, but just beefed it up a little bit, mixed some things."

Jon went on to say that he would personally "love" to see SAVATAGE recurrected, adding that "it's very possible." He said: "If it's gonna happen, we'll make an official announcement, but we have been working together, just because with the pandemic and all that, we're bored; there's nothing to do. So we've been trading ideas through e-mails and on the phone. Me and Al wrote three or four things together. Me and Chris Caffery have worked on a few things together. What else are we gonna do? There's nothing to do. So, yeah, we'll see what happens."

Oliva also revealed that he had been talking about a SAVATAGE comeback since before O'Neill died. "Paul and I had many meetings about it, and we were talking about, 'Well, if we did do it, what would we call it, and how would we operate it?'" he said. "And I said to him, 'Well, if we do it, we should call it 'Still The Orchestra Plays'. And me and Zak [Stevens] should sing a lot of songs together and have certain songs, so it would be the two lead singers.' And we'd feature all kinds of music — all the types of music. 'Cause SAVATAGE was never really one sort of bag, especially when Paul got involved. From 'Gutter Ballet' on, it was all kinds of different things, which was great — I thought it was great. And which led to TRANS-SIBERIAN ORCHESTRA."

Back in 2016, Jon announced on social media that he suffered a stroke in April of that year. At the time, he said: "It was not as serious as it could have been, but it did leave me with some physical recovery challenges often associated with strokes."

Despite his health issues, Jon said that he didn't regret the way he had lived his life. He wrote: "I lived the rock 'n' roll lifestyle since I was 18. It's all I knew and I enjoyed the ride very much. But there comes a time in everyone's life where you have to step back and make some life-changing decisions...which I have."

Shortly after SAVATAGE's reunion performance at the 2015 Wacken Open Air festival in Wacken, Germany, Oliva claimed that he felt better than he had in 20 years because he had "stopped drinking and eating" in preparation for the concert. He explained: "It's my voice that's freaking me out, because, even when I was in my late 20s, early 30s, doing songs like '24 Hours Ago' were always really hard to do. And, of course, I didn't realize that it was all the drugs and alcohol I was doing. But, after doing that, getting my act together and stuff, singing '24 Hours Ago', it's actually easy now. [Laughs]"

SAVATAGE's last album release, "Poets And Madmen", in 2001 was highlighted by Jon Oliva's return as lead vocalist, replacing Zak Stevens, who left the band citing family reasons, and the departure of Al Pitrelli, who accepted an offer to join MEGADETH in 2000. Pitrelli did record solos for some songs prior to his departure. Another very limited U.S. tour followed, supported by FATES WARNING in the early shows, and then NEVERMORE for the remainder. Around this time, Jon chose Zak's replacement in the form of Damond Jiniya (DIET OF WORMS). Damond performed Zak's parts on tour, with Jon having an increased vocal role in proceedings.