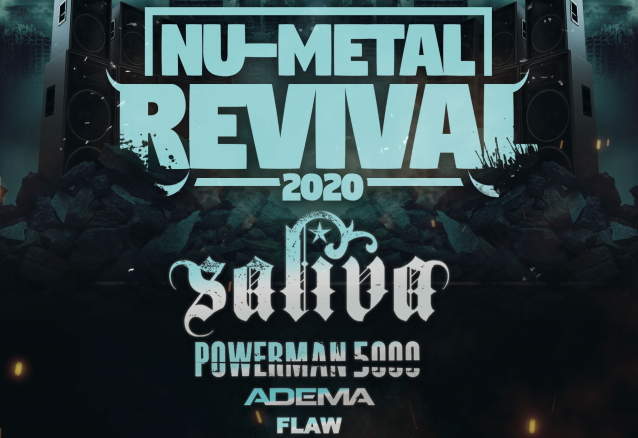 SALIVA, POWERMAN 5000, ADEMA and FLAW will hit the road this summer as part of the "Nu-Metal Revival 2020" tour. Also appearing on the bill will be the Salt Lake City rap/metal artist Andrew W. Boss. So far, only one date has been revealed: July 17 at the Starland Ballroom in Sayreville, New Jersey.

Tickets will go on sale this Friday, February 28 at 10 a.m., with more details expected later this week.

Last fall, it was announced that SALIVA would reunite with the band's original frontman Josey Scott for a possible tour in 2020.

SALIVA released six albums with Scott and tasted platinum success and a Grammy nomination for its first big hit, "Your Disease".

"Now that I'm clean and sober, my mind is clear, and I'm focused like I used to be in my 20s when I wouldn't take 'no' for an answer," he said. "And I went out, and people told me I'd never make it and they told I'd never get a record deal, and I said, 'Fuck you!' and I went and got it anyway — without a high school diploma. I've kind of got that focusness back."

He added: "I wanna do something for the fans, because they have been so loyal to us and so amazing through the years. I've heard people on the web sites and on Facebook and everything: 'When is Josey coming back? Can we, please, have Josey back?' And I want to come back and do my thing."

Just announced! The Nu-Metal Revival Tour 2020 stops at Starland on July 17th featuring @Saliva @therealPM5K + more! Venue presale starts this Thursday at 10am, public on sale this Friday at 10am. pic.twitter.com/GUM4AnxlY3