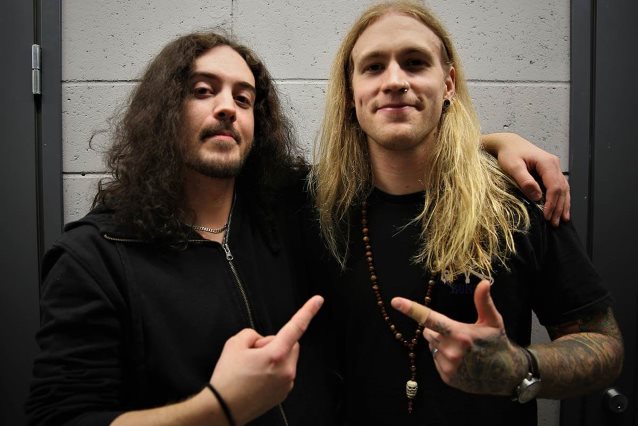 SABATON drummer Hannes Van Dahl will sit out a few shows on the band's European tour while he awaits his first child with his partner of the last few years, NIGHTWISH singer Floor Jansen. Fillling in for him will be Daniel Sjögren (TWILIGHT FORCE, BLOODBOUND).

Says Hannes: "Time has come for me to travel homewards for a short while to be with and for my family, home in the north.

"My family on the road will have the miles pass underneath the busses and trucks as usual and the show will go on!

"So, I hereby introduce you to a dear friend of ours: Daniel Sjögren! He is the sweetest of dudes and an excellent drummer! He was kind enough to help us out and will sit on my drum throne for a few shows until I’m back with my road family, brothers and sisters all over the world again!

"Daniel has been rehearsing with Hannes and the band for the last four weeks.

"I'm a bit jealous of all you guys who [are] going to see him kill it every night.

"Please give him your awesome warm 'SABATON Battalion' support, have fun and I'm looking forward to seeing you all very soon again!"