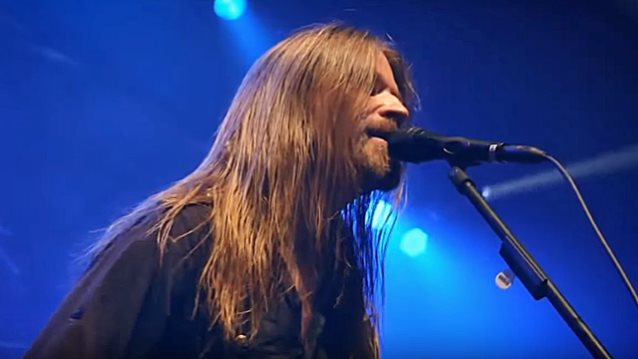 "The Cassius Morris Show" conducted an interview with bassist Pär Sundström of Swedish metallers SABATON prior to the band's May 5 show at Union Hall in Edmonton, Alberta, Canada. You can watch the full chat below. A few excerpts follow (transcribed by BLABBERMOUTH.NET).

On people using their cellphones during shows:

Pär: "It's kind of what people do these days. Of course, at first, you find it intimidating when you stand onstage and people are more interested in looking down on their cellphones than [you] on the stage, but it's getting more and more common. We just have to live with it. We can't forbid them to do it. It's part of the experience for people to share it with other people who aren't there at the moment. One thing has changed with that, and that is we will never, ever again, see an absolutely fantastic crowd. We've seen it, especially in the places, the crowd is great here in Canada, but there are places where they are way more crazier around the world. We see it especially there. It's like what it used to be; it's not what it is today. You have a big portion of the crowd spending more time on their phone than in the mosh pit. You don't get any more one hundred percent of the crowd singing. You get a couple that stand with their phones and film. The times of the best crowds in the world are over."

On when he knew he wanted to be a musician:

Pär: "That would be when me and my friend, we were looking at MTV in his basement, then we were just like 'Oh!' I did play a little bit, but when I decided, 'Yeah, hell yeah! This is what we want to do.' This is when we saw the videos of SKID ROW 'Youth Gone Wild'. Like, 'This is the stuff!'"

On how SABATON got its "big break":

Pär: "The big break didn't come in the beginning. We've been going on for 18 years, even though in America people think SABATON is a new band. We've been going on for quite some time, eight studio albums out, we've done a lot of accomplishments over the years, but there is points, or parts in our career where defining moments are, pretty much. I would say the first one would be when we wrote the song 'Primo Victoria', then I felt comfortable it would take us a long way. The second one was the release of 'The Art Of War', which today, I guess, is the best reviewed, highest-reviewed score of all time in Germany if you combine all the magazines and stuff. That's when we got a little bit of acknowledgement outside of Sweden. When we started to tour 'Carolus Rex' is really when things picked up. We were on a new label, fully armed, got a new lineup that was doing it for real now."

On his thoughts on the Rock And Roll Hall Of Fame inducting pop and rap artists:

Pär: "I think they should be divided, but who am I to decide that? Go and win a hip-hop award, be in the Hip-Hop Hall Of Fame. Let a rock band be in the Rock [Hall Of Fame]. Where do you find Tupac [Shakur] in rock? I don't know."

On his craziest fan encounter:

Pär: "We have a lot of fans, obviously. I wouldn't say anything 'crazy.' I don't want to say anything bad about anybody. I appreciate what they do in their own way. To see some people coming back over the years, some people travel far away, what they do, this is what keeps me excited to play. I'm not, for me, it's not about that there's a thousand people, five thousand people, four hundred people, it doesn't matter at all. For me, there's enough if there's somehow one person in there who has impressed me by doing something I'm impressed with. That could be pretty simple, but a great sacrifice is somebody taking time off from work and going somewhere…it doesn't need to be much. Somebody put [forth] a lot of effort. For a billionaire, it's easy to give a million for somebody who has two apples and gives one. Everything is on a different scale, so I appreciate the people who did the little as well as the people who do the big ones up to what they can."

On whether certain rock musicians appreciate their fans:

Pär: "I think too many are occupied with their own egos. That's one thing that creates a lot of problems for a lot of bands in the end. They don't see what they are. They don't realize what they are to people. On the other hand, it makes it easier for us, I guess."

SABATON's eighth album, "The Last Stand", was released last August via Nuclear Blast. The follow-up to 2014's "Heroes" was once again produced by Peter Tägtgren (PAIN, LINDEMANN, HYPOCRISY) and it "marks a brand new chapter in SABATON history," according to a press release.