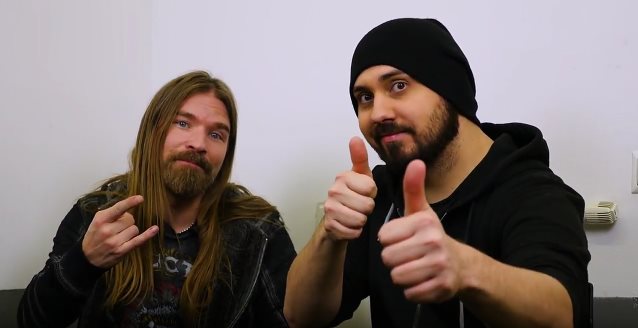 Austrian web site Beyond Pixels conducted an interview with guitarist Chris Rörland and bassist Pär Sundström of Swedish metallers SABATON prior to the band's January 27 show at Gasometer in Vienna, Austria. You can watch the chat below. A few excerpts follow (transcribed by BLABBERMOUTH.NET).

On the best way to describe SABATON's music:

Pär: "You have to have the words 'heavy metal' in there, because it's what we do. I suppose historical lyrics has to go in there, and a lot of fun."

On what fans can expect from the band's current stage production:

Chris: "For this tour, there is so much new stuff we're bringing on tour now. New songs, old songs we haven't played before, the production is way bigger, so going into this tour was kinda hectic. But I think it was even more for you [Pär]."

Pär: "It's a big production and a lot of new stuff for us, but the tour has started really well. I think it's passing so fast that everybody is shocked that it's almost the end of the first run of the tour, which feels absolutely weird. It feels like we're just getting started. That has to be a good sign because it means we're having a lot of fun, even though we are sick, everybody is sick on the tour bus; coughing all night, people are sneezing, coughing. We have ear infections, nose infections, throat infections. It's not so easy to get along, but you just have to do it. One day you have a cold, the next day you have something else, but we all have to do it, and the important thing is we do good shows no matter what."

Pär: "The good thing is we have so many requests. Every night we are playing a lot of the new album. Tonight in Vienna, we are playing six of the new songs, for example. It's not because we want to play new songs only, it's because people want to hear the new stuff. There are bands who tour depending on if they play their first albums from the first years, or something like that. They play a new song just because they have to promote the new album, but the people are there to hear the old stuff. It's great to come every night and see people really want the new album. The focus is on that, so even though there is some people who want us to play older songs, most people want us to play new songs. For us, it's a sign we're going the right way and we keep doing good albums. Not only did 'The Last Stand' reach the highest position on the album charts so far, but we also created an album people want to hear live. It's fantastic for us."

On the departure of guitarist Thobbe Englund:

Pär: "It was in the middle of the summer, and it was really hard to lose such a good friend from having him around all the time. Of course, he's always with us in here and with the phone, so we are staying in good contact all the time. But it's a big miss not having him in the dressing room and tour bus. He's a great character in all senses, and a good friend. But we got another one as well and it doesn't necessarily come that 'Now we missed everything and we have something not as good.' [Laughs] Thobbe was a great addition to the band. He was a SABATON fan for a long time. He was really excited about coming into the band, and I think it was very nice the way the transition was made. The fans were accepting of it, understanding Thobbe's decision that he wanted to try his own stuff, and play his own music, write his own songs. This is the reason. I'm happy that the fans accepted this in a good way, and welcome Tommy [Johansson] every night."

On the historical element to the band's lyrics:

Pär: "I save a lot of stuff now when we do research, when we write the lyrics. It is easier these days than when we were doing 'Primo Victoria' and 'Attero Dominatus', at the time, you couldn't rely on facts on the Internet in the same way. Today, there are plenty of good sources on the Internet about things. We don't need to go find something else. What we sing about, there will always be two sides. It is a little bit complicated to find what is right and wrong. We know we have not been perfect in all senses. We have been corrected later by people saying 'There wasn't 3,000 people, there was 2,865.' And we'll be like, 'Yeah…, but maybe it sounded better to sing about 3,000 at the time.' But the story we found was 3,000, then somebody else corrected the story. There is even some of the stories that we sing about have been since we sung about them, they've become popular discussion. People have dug into them and found out facts that didn't exist before, including things like they moved an entire battlefield. It wasn't happening in this city, it was happening there, in another village or something. Things like that. Nobody would know when we were writing the lyrics, but as we write them, people go 'This is very exciting.' And they start to dig, and then they find out, 'You are wrong! This is it!' But, that is alright. We have done what we could with what we have."

SABATON will begin the North American leg of "The Last Tour" headlining trek on April 20 at The Trocadero in Philadelphia. The tour will hit seven Canadian cities plus Chicago, Anaheim, Dallas, and conclude at the The Fillmore in Silver Springs, Maryland on May 22.

SABATON's eighth album, "The Last Stand", was released on August 19 via Nuclear Blast. The follow-up to 2014's "Heroes" was once again produced by Peter Tägtgren (PAIN, LINDEMANN, HYPOCRISY) and it "marks a brand new chapter in SABATON history," according to a press release.