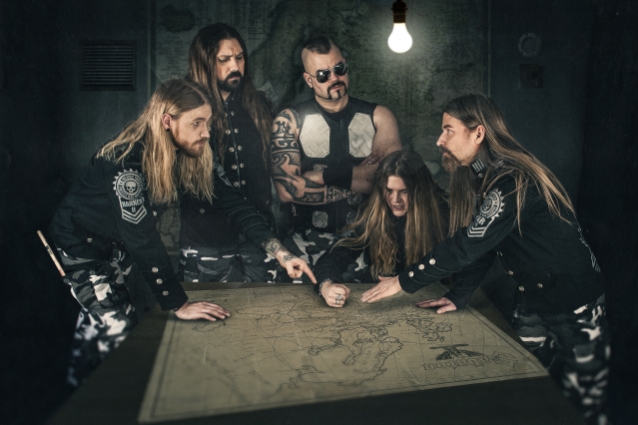 SABATON bassist Pär Sundström recently spoke with France's United Rock Nations. The full conversation can be streamed below. A few excerpts follow (as transcribed by BLABBERMOUTH.NET).

On premiering "Fields Of Verdun", the first single from the group's new album "The Great War", via a cover by APOCALYPTICA:

Pär: "I really like their version of it. It was an idea. I went down to Madrid to meet with the guys in APOCALYPTICA, because I had the idea that perhaps we can do it, so I wanted to see them myself and I wanted to see their concert. I like their band; I like their concept of the band. I went to see them and meet the guys, and I explained the idea, and they said, 'Wow, this is pretty cool.' I said, 'We need to do it before the song is actually out, so people will be a little bit shocked,' and people got shocked."

On whether the group felt any extra "pressure" to make a good album since it's currently the band's 20th anniversary:

Pär: "We always have a lot of pressure when we do an album. I would say it grows with every album. 20 years anniversary or not, it would be the same anyway. The 20-years anniversary didn't really affect us that much. We thought about it, and a lot of people were, like, 'Oh, you have to do a tour where you play old songs, and you have to do reissues of all the albums,' and we didn't want to do that. Let's focus on the future of SABATON instead of the past."

On the inspiration to write new album "The Great War":

Pär: "What we have been doing for many years is, a lot of the stuff that we sing about are ideas sent in by fans... Some of the ideas on this album, we would have not known about if it wasn't for our fans. They do contribute. On this one, not for any research, because we had our own historians at this time, so we didn't need any historical input, but some ideas about the topics. For most of our albums lately, there's been a lot of input by the fans... Even if World War I is less known than World War II in major medias and in popular culture, we still have some topics that we knew we wanted to cover, some topics that we wanted to sing about. A lot of them came out from ourselves, and a few came from fans. 'Attack Of The Dead Man', that is purely created by a story sent in by our fans. Those that fans send in, it's just scratching the surface. We don't want to get the full picture of an event immediately. We get just a tiny bit of the idea. Then, we're like, 'What kind of mood does this topic [convey]? It's a happy mood? It's a sad mood? It's a horrible, scary mood? Whatever mood we get from the topic, we find a song for it — a musical piece that we have written — and then we match them. Then, when we're like, 'Okay, this will match,' we start reading and researching... It's a topic that engages us, so we were quite excited when doing it. It's interesting to do the research. To say that it's interesting about war, some people might say, 'Oh, you're promoting war.' It's not about that. It's history."

Pär: "War is not really black-and-white. War always has a very gray color, because war is conceived by different sides for whatever [reasons] they have. In all conflicts, there are a lot of losers and a lot of people who have their different inputs and think that, 'We are the good guys. They are the bad.' For SABATON, it's not about taking a stand. We write the songs from different kinds of angles all the time, but they are not our angle. We are not there to say, 'This was right. This was bad.' We are there to tell the story — to retell the story from one side. But they are not our [side]."

On the origins of his interest in military history:

Pär: "Partly, it comes from starting to write about it. I liked history before, and so did Joakim [Brodén, vocals], and the first songs we wrote had no connection to this whatsoever. We were, 'This is no fun to write lyrics for the songs. They don't mean anything. We need to write about something that matters — something that is real.' We started to write about military history, and as time goes, our interest becomes deeper and deeper... We wanted to write about something where everybody has emotions towards. No matter if you have been living in Sweden, who has been neutral — thankfully, we haven't seen war in Sweden for a very long time — but even if you live in Sweden or you live in a war-torn country somewhere in the world, you have a connection to war. War, unfortunately, is something that unites all people."

SABATON's ninth album, "The Great War" was released on July 19 via Nuclear Blast Records. The band started recording the disc exactly 100 years after the end of the first World War (November 11, 1918) and took three months of intensive work to complete the album with longtime producer and collaborator Jonas Kjellgren at Black Lounge studios. The effort was mastered by Maor Appelbaum and the artwork was once again created by Peter Sallaí.