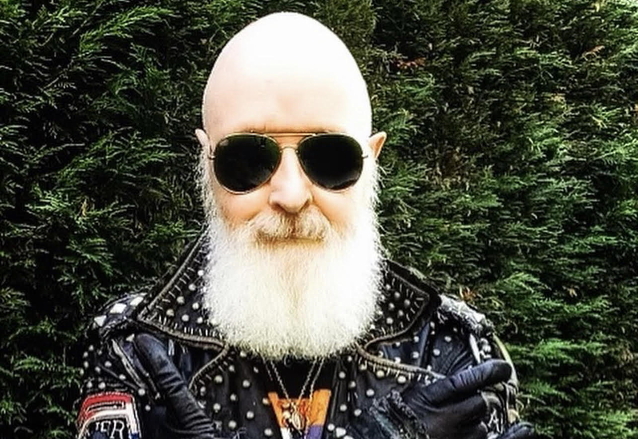 Rob Halford says that he he is having "a lot of fun" working on his debut blues solo album. The JUDAS PRIEST singer is collaborating with the same team that assisted him during the making of his 2019 Christmas LP "Celestial", including his brother Nigel and his nephew Alex (son of PRIEST bassist Ian Hill).

Speaking to Full Metal Jackie's nationally syndicated radio show, Halford said about his upcoming blues record (as transcribed by BLABBERMOUTH.NET): "The blues is just an expansive landscape of different styles and subgenres and everything else, much like metal. And so I'm really intrigued and excited about how this blues album is gonna turn out. You may have heard that we've got the basic building blocks ready. I've just gotta find the time to put my own work into the project.

"This just stemmed off from the great experience that I had with my brother Nigel on drums and Alex, my nephew, on bass — Ian Hill's son — and our respective friends [who are] musicians.

"It's just a lot of fun," he continued. "Everything should have that fun element. It's an adventure again, like everything in music. And as long as you're having good times and something of substance is coming out of it, then have a go, as we say in the U.K. And that's what we're doing.

This past May, Halford told Kyle Meredith that he already had "enough material to make a [blues] record." He added: "The only thing that I threw at the guys was do what you feel you wanna do in terms of ideas. I did give 'em a list of some of my favorite blues styles and blues performers as a little bit of a template for the guys to bounce off of."

Rob reiterated that his upcoming blues album will be a varied effort covering a host of different styles and sounds. "You could go into one specific area and stay in that place and focus [on that and make] little subtle changes here and there, but much like the 'Celestial' album, I think this effort should just be a little texture of every taste of all these different blues flavors," he explained to Kyle Meredith.

As for how his lyrical approach will be different for his blues album compared to the songs he writes for PRIEST, Halford said: "The blues is the blues. We all feel the blues, but you can have the happy blues as well as the sad blues, and you can have all of these characters in blues. The opportunities for stories for some of them, similar to the PRIEST inventions of fantasy, like the Sentinel or the Painkiller or any of those great characters that were created. You can throw your lyrics wherever you wanna throw them if they're connecting with the music.

"Messages in music are vital, 'cause we like to hear stories that we can relate to or attach ourselves to, in reality or in fantasy," he continued. "So that's gonna be an adventure for me. I love to sit down with a pencil and a piece of paper, 'cause that's how I do it, and just think. I have an idea, and I just throw some bullet words down instantly, and that's how the seeds start to grow."

A few years ago, Rob stated about his interest in making a blues record: "When I first became a musician in my late teens, I started to hear the extraordinary roots of the blues — Bessie Smith, Little Walter, Howling Wolf, Muddy Waters. They gave me the buzz… It's something I want to do because I want to explore what my voice can do in that wonderful world. That's how I learned to do a lot of that soaring, sweeping, and screeching. And also I discovered that I've got a voice that can go in different octaves, directions, and different kinds of projections. It's a combination of a sense of adventure and just being inspired by those guys, those wonderful singers. It's a mixture of everything but mainly a discovery of what the voice can do."

Back in 2015, Halford told Newsday.com that he was interested in recording a blues album and pursuing other non-heavy metal projects because he wanted to find out what his voice can do. He said: "I've always felt that [the blues is] very much a part of my background and musical roots. I don't know what kind of blues album I could do because there are so many different facets [to explore]. Maybe I'll just mix it up. As far as stuff out of the metal world, I'm a fan of people like Michael Bublé and Michael Feinstein. I've always been a fan of [Frank] Sinatra and Tony Bennett and Elvis [Presley]. I'd love to hear what my voice would sound like in that kind of musical mix, with wind instruments, trumpets and sax, piano, just that big-band sound."

Halford credited his vocal versatility and ability to take his voice in "different directions" as the main reason he was "so interested in trying these other opportunities." He said: I think if I had a voice that was different to what it is and was a little more in one focus, maybe I wouldn't be as adventurous about my ideas. But because my voice is able to do those different things, it's instinctive and natural to see what else I can do."

Halford released his autobiography, "Confess", in September 2020 via Hachette Books.