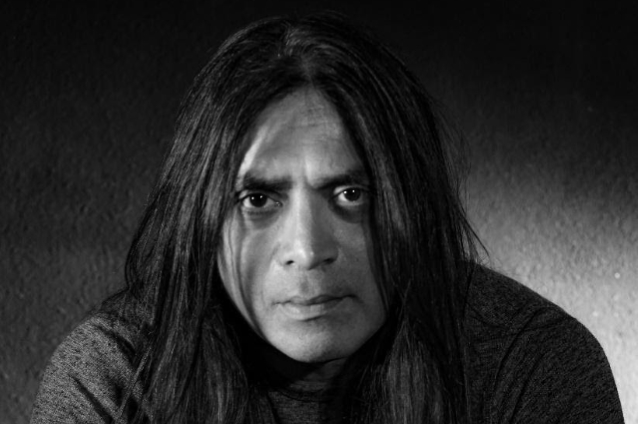 Josh Rundquist of That Drummer Guy recently conducted an interview with FATES WARNING frontman Ray Alder. You can listen to the entire chat below. A few excerpts follow (transcribed by BLABBERMOUTH.NET).

On releasing his first solo album, "What The Water Wants":

Ray: "Honestly, FATES was really busy doing a lot of things — obviously the two albums we did over the last five years, and all of the touring and everyone was busy. Then [FATES WARNING leader] Jim [Matheos] was doing the 'Awaken The Guardian' reunion thing. Everyone has been really busy. I took a break while he was doing that. I wasn't doing anything. Then he was going to do another ARCH/MATHEOS and I knew there was going to be quite a break in between the next FATES WARNING, so I went, 'All right, maybe this is the time for me to do something.' Now that I live in Europe, music is my only form of income, so I was basically, like, 'I have to do something.' And I wanted to. I actually wanted to do something different, work with different people and see how it was. It ended up being a lot of work, but it was a lot of fun. It's odd for me. When I record vocals or write my melodies for FATES, I have Jim to bounce ideas off of. This time it was a little more difficult because I was not being produced. I was self-producing the music. It's something I'm not quite used to. It ended up okay, I think. I'm pretty happy with it."

On assembling the musicians for his solo band:

Ray: "I didn't know exactly who to use at first. Here in the city of Madrid [Spain], I met this guy, Tony Hernando, he's the guitar player in this band LORDS OF BLACK, who are sort of a power metal band. He's a good guy, a great guitar player, a sort of a guitar-hero kind of guy. I started talking to him and I was saying I was thinking about doing a solo album and whether he'd be interested. He said, 'Yeah, of course, man. What do you hear? What kind of music are you listening to? What do you want to have on the album?' I said 'I don't really know. Let's start working on stuff and see what fits.' It started out from there. I knew right away that I wanted to use Craig Anderson for the drums. He's from the hardcore band IGNITE. He's a longtime friend of mine, one of my best friends in the world. He's a great drummer, super solid. I've worked with him a few times before. Tony and I were working on things; we had a few songs down. He and his band were busy with other things and they were having problems with his singer; he was really busy. He couldn't really focus as much as he wanted to or as I wanted him to. I believe I was on tour with FATES. Mike [Abdow, FATES WARNING touring guitarist] said, 'You're doing a solo album. I just want to you let you know if you're interested, I'm happy to contribute.' I said, 'Absolutely. I'd love to hear what you have.' He started sending me songs. I loved what he was sending me. I loved the vibe; I loved the feel. Everything about it was great. So we just started moving on from there. Mike ended up writing seven of the songs. Tony wrote three. That's pretty much what it is. There are still some songs that we didn't use. I just wanted to use the ones that I felt that fit best on this album. There are a few songs still laying around that I think are pretty good, but didn't make it to the album at this point. Who knows? We'll see."

On the musical approach he took for "What The Water Wants":

Ray: "I wanted it to be interesting, too. I didn't want to be pigeonholed. I didn't want to be in one genre, and I especially didn't want it to sound like a FATES WARNING album or rehash music from FATES. I wanted it to be different. I wanted to highlight what I can do vocally. There's a lot of harmonies. There are some songs that have eight tracks of vocals. I was just having fun with it. It's not something I would normally do in FATES. That was the cool part about it."

"What The Water Wants" will be released on October 18 via InsideOut Music. The LP was mixed by Simone Mularoni (RHAPSODY, MICHAEL ROMEO, DGM).