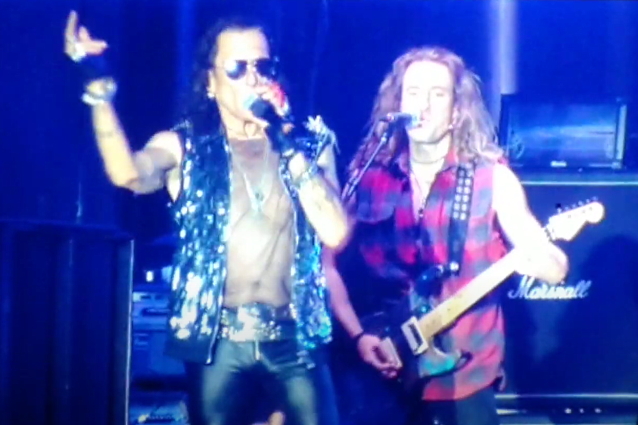 Lindia, a Los Angeles-based guitarist/multi-instrumentalist and music teacher who played with David Lee Roth on the VAN HALEN singer's 2020 tour, made his live debut with RATT this past Thursday (June 24) at the Lakes Jam in Brainerd, Minnesota. Video footage and photos of the concert are available below.

On Friday, Lindia shared a photo of him performing with fellow RATT guitarist Jordan Ziff, and he included the following caption: "STOKED to be jammin in RATT with my boi!"

Singer Stephen Pearcy and bassist Juan Croucier are the sole remaining original members in RATT's current lineup, which made its live debut in July 2018 in Mulvane, Kansas. Also joining them in the band is drummer Pete Holmes (BLACK 'N BLUE, RATT'S JUAN CROUCIER).

Sanders joined RATT in 2018 after the departure of original axeman Warren DeMartini. Sanders spent almost two years playing sporadic shows with the band's most recent lineup before quitting the group left RATT in early 2020, saying in a statement that he was retiring from the music industry.

According to Ziff, RATT was planning to play several gigs early last year as a four-piece following Sanders's exit from the group, "but we only did one show where I was the only guitar player in the band," he said during an appearance on a video podcast hosted by Todd Kerns. "And it was in February. And then that was it. And then COVID [hit]."

RATT — featuring Pearcy, Croucier and DeMartini — played a number of shows in 2017 after reforming a year earlier in the midst of a highly publicized legal battle with drummer Bobby Blotzer over the rights to the RATT name. They were joined at the gigs by ex-QUIET RIOT guitarist Carlos Cavazo, who played on "Infestation", and drummer Jimmy DeGrasso, who previously played with Y&T, WHITE LION and MEGADETH, among others.

In recent months, Pearcy and Blotzer have mended their differences, as was apparent during the RATT singer's livestream concert on April 2 from the world-famous Whisky A Go Go on the Sunset Strip where Bobby made a special guest appearance on several songs.

STOKED to be jammin in RATT with my boi!