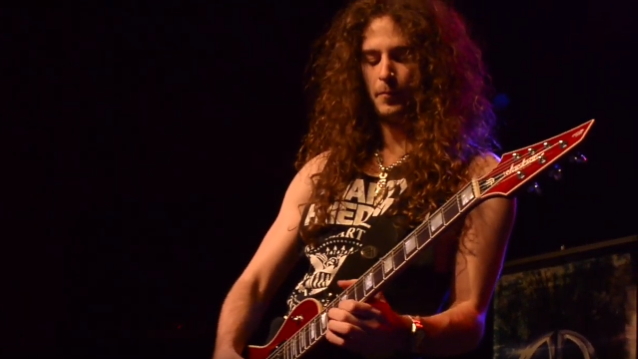 New RATT lead guitarist Jordan Ziff — who is also a member of Marty Friedman's backing band — recently spoke with Mark Strigl of Talking Metal. The full conversation can be streamed below. A few excerpts follow (as transcribed by BLABBERMOUTH.NET).

Jordan: "It's just one of those things — mutual friends recommend you for something. There's no, like, secret way to get involved with bands or anything — it's kind of just word of mouth, people recommending you for types of gigs. Same thing with Marty — a mutual friend was, like, 'Hey, dude. You've got to listen to this guy,' and then Marty hit me up and was like, 'I really dig your playing. Would you like to play in my band?'"

Jordan: "We've all kind of been writing on our own, because we haven't really had a lot of time to get together and do some writing together. Come January, we have some time off, so we're all going to get together and write some stuff and put out a few singles. [That's] kind of what we're looking to do — not a full album, just do track-by-track. We don't need to sit and spend a million years trying to do a whole album when, at the end of the day, it's just like, 'Let's just write a good song [and] put it out, [then] write another good song [and] put it out.' I feel like that's the best way to do it these days anyway... I have some song structures. I know Juan [Croucier, bass] does; I know Stephen [Pearcy, vocals] does. It's all about just getting in a room and seeing what totally clicks with all of us jamming together."

On writing music for a band that peaked commercially before he was even alive:

Jordan: "When I started writing, I was kind of thinking about that, and I thought I could do a little bit of both — what would fit kind of in that stream of what they were doing before, and what would be cool to kind of bring them into a more modern type of vibe — and blend the two sounds together."

On playing with Marty Friedman:

Jordan: "We were e-mailing back and forth. I played in a band [RAZER] with this guy, Chris Catero, who used to play in Marty's band, and we did and album together, and he just sent it over to Marty. Marty listened to it and said, 'Hey, man. I really dig your guitar playing. Do you think you'd maybe want to play in my band?' We talked probably back and forth for, like, a year and a half before we even were able to put together a U.S. tour, but it was pretty instant chemistry between me and him."

On whether he plans to continue performing with Friedman:

Jordan: "We plan on doing other stuff — it's just scheduling is kind of brutal for me now at this point, because I'm so busy with RATT. He just did some Australian dates, and he did a show in India as well, and I'm sure that if I was free to do those, we were trying to figure out a way that I could go do that, but obviously I'm busy with [RATT]. There will be some [activity] at some point — just whenever we get a chance to do it."

Jordan: "The original guitar player actually lives really close to me, and we're kind of friends. Now, we're really good friends, but at the time, we kind of were like acquaintances. He asked me if I wanted to do that tour, so that's kind of how that whole thing came together."

Jordan: "There's a lot of other guitar players that are my age, but I feel like everyone's main focus is kind of on Instagram and YouTube. For me, that's not my focus at all. I want to be out working and playing live, so whatever that is is whatever that is. As far as people my age, I don't really have a lot of friends that are kind of like, 'This guy plays in that band.' It's just not really like that anymore. It's kind of unfortunate, actually."

Ziff began playing with Friedman for the former MEGADETH and CACOPHONY guitarist's tour in support of his acclaimed 2014 release, "Inferno". He joined RATT in 2018.