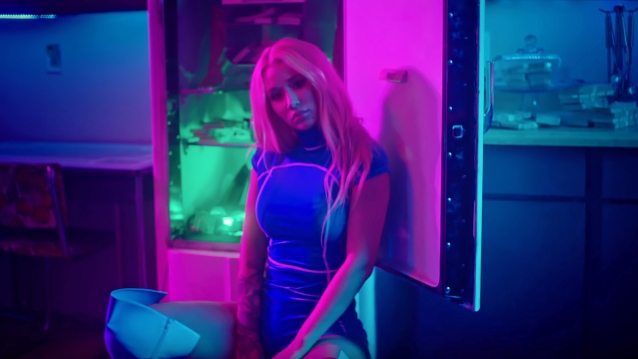 Iggy Azalea has brushed off criticism from heavy metal fans for sporting a controversial CRADLE OF FILTH T-shirt.

The rapper posted an Instagram selfie on New Year's Eve, showing herself wearing the shirt, with only the red lettering of the band's name visible above part of an image of a nun.

Iggy captioned the post with a "flipping the bird" emoji and the word "2018."

Metal fans recognized the shirt as an infamous CRADLE OF FILTH piece of merchandise, which features a nun touching herself on the front, and the words, "Jesus Is A Cunt" on the back.

After fans picked up on the imagery and wording on the shirt, many of them took to social media to hit out at Iggy for her choice of wardrobe, questioning whether she actually knows who the British extreme metal band is and suggesting she's just trying to be edgy.

In response to the backlash, Iggy wrote — and later deleted — on Twitter: "Omg (oh my god) I'm too controversial for the metal community too. It was a Christmas gift! (My) only regret is not posting it on Christmas.

The "Jesus Is A Cunt" shirt has been a source of controversy for more than two decades, with the CRADLE OF FILTH members previously warning fans about wearing the shirt in public.

"It's a dangerous T-shirt to wear, full-stop," CRADLE OF FILTH singer Dani Filth told Rolling Stone in 2015. "I did walk around in it back in the day, but people don't understand that there's a time and a place for this sort of thing."

In 1996, a CRADLE fan was arrested in London for wearing the T-shirt; he was found guilty of committing "Profane Representation under the 1839 Act" and was fined £150. A year later, the group's drummer was arrested for creating a public disorder and resisting arrest in Dover as he and his bandmates attempted to leave the country for a gig in the Netherlands. In 2008, the shirt was officially banned in New Zealand by the country's office of the chief censor, which stated that, "The injury to the public good that is likely to be caused by the availability of this T-shirt originates from the manner in which it associates an aggressive and misogynistic meaning of the 'harsh, brutal and generally unacceptable' word cunt with Jesus Christ, and depicts an image of a chaste woman engaging in sexual activity." 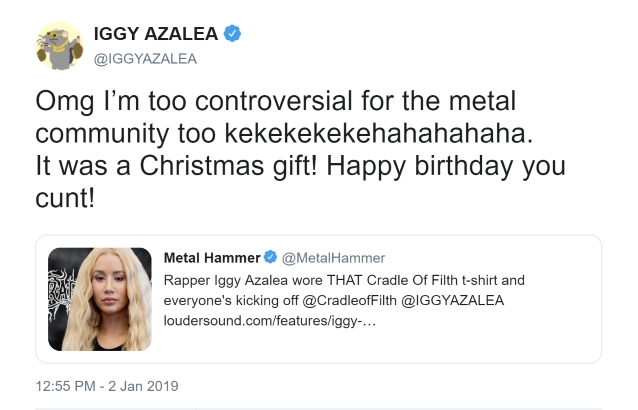