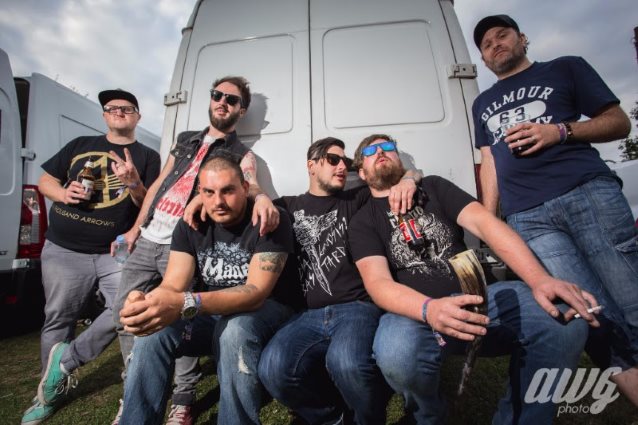 Resurrected Corby, U.K. metallers RAGING SPEEDHORN have announced that co-vocalist Frank Regan will not be joining them on their upcoming U.K. run with SKINDRED or their appearance at HRH Metal, as he has been ordered by doctors to rest. Regan's spot will be filled by RSJ vocalist Dan Cook. Sadly, the two March shows at The Black Heart are to be moved to later in the year.

RAGING SPEEDHORN guitarist Jim Palmer had this to say on the announcement: "Unfortunately, due to doctors ordering immediate rest, our brother Frank Regan won't be with us on our stint with SKINDRED and the HRH Metal Fest. We will have a stand-in to help us out for these shows, but after those dates, we will be ceasing all live performances until Frank gets the go ahead from the doctors to return.

"We feel that continuing any further than these shows without Frank is not an option.

"We apologise for any inconvenience this causes and hope you understand."

The band, who cancelled a handful of dates at the end of 2016, have stressed that they are not splitting up, nor is Regan leaving RAGING SPEEDHORN, and that once he is a hundred percent physically fit and cleared by doctors, he will be rejoining the band.