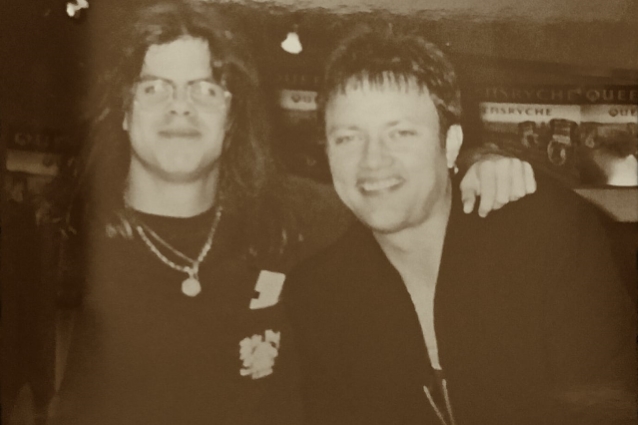 QUEENSRŸCHE vocalist Todd La Torre has shared a nearly three-decade-old photo of him with the man he replaced, original QUEENSRŸCHE singer Geoff Tate.

La Torre posted the picture on his Facebook on Friday, along with the following caption: "As a huge fan of QUEENSRŸCHE, I waited in line for an hour + to meet the band at an instore signing. Here is a pic of me and Geoff Tate I have kept private for decades. Little did I know that 20+ years later I would become the singer for QUEENSRŸCHE. Crazy."

La Torre joined QUEENSRŸCHE in 2012 after the rest of the band fired Tate and publicly feuded with its former singer over the rights to the QUEENSRŸCHE name.

A former member of CRIMSON GLORY, La Torre has called QUEENSRŸCHE his "favorite band" since he was "probably 14 or 15 years old." He later said about the opportunity to share the stage with QUEENSRŸCHE: "To be able to play those songs with the actual members was really a dream come true... I mean, I met them [more than] 20 years ago at a signing session they did in Clearwater, Florida. And they signed my 'Warning' album cover; I still have it. In my home studio, I have 'Promised Land' signed and beautifully framed by all the members. So when this actually came to be, I had to pinch myself... This resonates very personally for me because I have a lot of emotional connection to this music, and the fans do, too... It just all feels very comfortable and natural. And I couldn't be more honored. This is a legendary band that's never had another vocalist front those members. And so, out of all the people in the world that could have gotten chosen or would be vying for that position, I feel very lucky and fortunate that they chose me."

La Torre and Tate crossed paths again in June 2017 when QUEENSRŸCHE and Tate performed at the Rock Fest Barcelona festival in Barcelona, Spain, where Geoff appeared as the special guest of AVANTASIA. Tate later told the "92 Minutes Of Hair With Mel" show on the Las Vegas, Nevada radio station KOMP 92.3: "It was the first time I'd seen the band play without me. I'd never heard their new singer, but I watched them play and they were great, and that singer is fantastic. He's amazing! He sounds just like me. It was eerie and weird. And then I met all the guys afterwards and shook hands with them, we hugged and said hello, and it was a really nice little reunion, you know, get-together."

La Torre recounted his meeting with Tate during an appearance on SiriusXM's "Trunk Nation". He said: "[Geoff] came over and kind of tapped me on the shoulder or something and said, 'Hey,' and put his hand out and said, 'We never really had a chance to meet, really.' And I said, 'Sure.' I shook his hand and he said, 'With everything that kind of went down…', and I said, 'Of course.' And he said, 'This is the first time I'ver heard you sing.' And I didn't know if he meant at all or, obviously, live. And so I said, 'Okay.' He said, he goes, 'Wow! You're amazing!' And I said, 'Well, thank you very much. That's nice to hear.' And I was complimentary of him. I said, 'Listen, for what it's worth, I have defended you. I know that sometimes the media and people can try to stir the pot, and for what it's worth, as far I'm concerned, you've done it all. I was kind of just expressing the sentiment, like, 'You don't have anything to prove in my book. You've already done it all.' And I said, 'I'm doing the best job that I know how.' I told him that the 'Empire' material is actually more difficult for me. I expressed to him that he's always had a very smooth control over those vocal parts, and that's more difficult for me. Now the older stuff is easier for me.'"

Todd said that he he appreciated Geoff's encouraging words, especially considering how awkward it must have been for Tate to witness his former band performing their classic songs with a replacement singer.

"Of course, there are some people that are divided still, the purist type of mentality, and I've heard it all: I suck and I don't sound anything like that, blah blah blah. And so I thought, what better testimony that the band is on the right track, the vocals sound worthy than to hear that from the original singer…" La Tore said. "I don't like to use the word 'endorsement,' but certainly acknowledging that the vocals sound great, the band sounds tight. I just thought, 'Wow, that's kind of an interesting perspective,' if you look at it from what I'm mentioning, where some people say, 'Oh, it doesn't sound right,' or this or that. And you say, 'Well, the original singer seems to think that it sounds excellent,' and what better testimony do you need?"

As a huge fan of Queensryche, I waited in line for an hour + to meet the band at an instore signing....