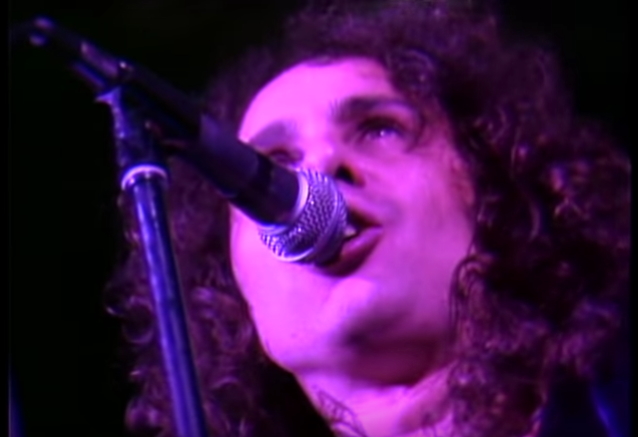 A previously unreleased rehearsal recording of BLACK SABBATH playing the song "Heaven And Hell" in 1979 during the pre-production sessions for the album of the same name can be streamed below. The track, which features SABBATH's longtime keyboardist Geoff Nicholls on bass, was uploaded to YouTube by Geoff's stepson and executor of his estate, Gary Rees.

Rees stated about the "Heaven And Hell" 1979 rehearsal recording: "I recently found this SONY C-90 tape cassette amongst the thousands in Geoff Nicholls' archive. On the inlay card is written ' ON & ON HEAVEN & HELL ORIGINAL VERSION GEOFF PLAYING BASS'. Inside the cassette case was a Maxell UD 90. On the A side again in blue ink ballpoint is written 'LADY EVIL (crossed out) BLUES + SLAPBACK'. The B side is written 'On + On HEAVEN HELL ORIGINAL GEOFF ON BASS' Nowhere does it say that this is BLACK SABBATH on the cassette. At the end of the uploaded song you can hear talking that sounds to me like Geoff talking then laughing.

"I have uploaded the most complete version closest to the album version. This recording, in my opinion is from July 1979 in their rented house in Bel Air, California. On And On Heaven And Hell may have been the original working title."

Lineup on the recording:

In two separate books by the late Garry Sharpe-Young, "Black Sabbath, Never Say Die, 1979 - 1997" and "Sabbath Bloody Sabbath, The Battle For Black Sabbath", Nicholls spoke about how he came to contribute his bass playing to the classic track.

Nicholls was originally led to believe his jaunt to Los Angeles was more by way of a favor. "Provisionally this was supposed to be just for two weeks, but very soon after I got there, Tony asked if I wanted to join the band full time," Geoff told Sharpe-Young.

Due to Geezer Butler's absence during the initial sessions, Nicholls was enlisted to play bass at first "to start getting the songs worked up. The very first song we did was 'Heaven And Hell' — not bad for a first go, eh?" he said. "Tony had a riff which he put over my bass line. I had used a very similar chugging bass line in QUARTZ for 'Mainline Riders', so I just did that. I was just messing about with this bass riff and suddenly everything started to build up from there. It was very, very simple but it really worked."

Geoff also took issue with the fact that the bass line had been later attributed to Butler.

"Nah, no way," Nicholls said. "Geezer wasn't even there. I can remember the first studio jam of that song as clear as day. It was all very spontaneous too. By the time Tony, myself, Bill and Ronnie had finished, we had this song that was eight and half minutes long. It worked and we all had some big smiles on our faces that day. Afterwards, Geezer told me he would never have played that riff on the bass because it was so simple. It was funny, though, Geezer saying that about 'Heaven And Hell', because he was right — he would never have played that bass line, which, of course, means that 'Heaven And Hell' might never have happened in the first place. It was me messing about on bass that started the whole song off."

Unfortunately, Geoff never got any credit for his alleged writing contribution to the song "Heaven And Hell" or any other BLACK SABBATH songs from the early to mid-1980s.

Nicholls died in January 2017 after a long battle with lung cancer.

Geoff, who played keyboards on all of SABBATH's albums between 1980 and 1995 and toured with them, was reportedly in remission from cancer at the time of his death but succumbed to the side effects of chemotherapy.

Nicholls's first appearance on a SABBATH album was on "Heaven And Hell". Although his main role with SABBATH was on the keyboard, Nicholls also played some rhythm guitar at concerts. In addition to not always being credited as a full member of the band, Nicholls rarely appeared on stage during SABBATH shows and would instead play on the side of the stage or backstage.

Nicholls's involvement with the band ended when Adam Wakeman (a member of Ozzy Osbourne's solo band) was chosen to play keyboards during SABBATH's 2004 and 2005 tours as part of Ozzfest.

Four years ago, Ward described the songwriting process for the "Heaven And Hell" title track during an episode of his radio show "Rock 50". He said: "I can remember when we actually got that part of the song, when we actually got 'Heaven And Hell'. Things had been slow all week. We had been writing, but we hadn't really connected with anything that I can remember; we hadn't really connected too much. But it was a Friday afternoon. I was hanging outside, and Geezer was somewhere, and Geoff was in the living room, and Tony was in the living room. And I heard that famous riff [hums the main riff of the song], and [I was], like, 'Oh my God!' and I just came walking into the living room immediately and I sat down behind my drums. At the time, actually, they were Bev Bevan's [ex-BLACK SABBATH drummer] drums. They ended up in the house somewhere, and they were Bev's drums. And a nice kit too. Anyway, I started playing, and I just went into the backbeat behind Tony's riff, and Geoff was already starting to… getting grooving — he was already on top of that as well. And Ronnie was either in the kitchen or he had just appeared out of nowhere, like a flash of lightning or something, and Ronnie showed up and immediately he started jamming on some lyrics. And literally, about thirty minutes later, we had pretty much 'Heaven And Hell'… not literally as you hear it, because we did change just a couple of things around, but it was there on that Friday afternoon. I remember actually coming back down here into Orange County. We were up in Beverly Hills when we first wrote the song. And I remember coming back down and going, 'Oh my God! We've got one in the bag.' It was a great feeling. It just kept around my head, like, 'Oh, wow! This is very nice.'"