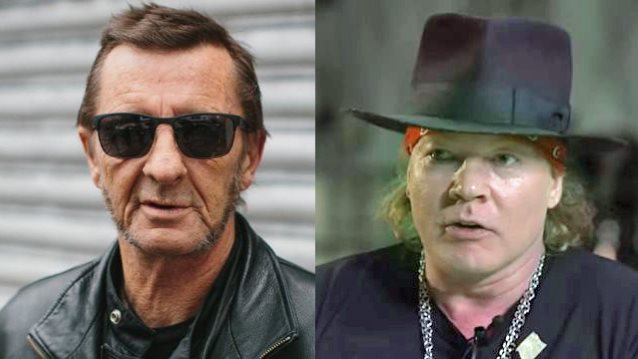 Former AC/DC drummer Phil Rudd says that he has changed his opinion about Axl Rose fronting the band.

The GUNS N' ROSES leader completed nearly two dozen shows with AC/DC last year after singer Brian Johnson, who joined in 1980 after the death of original vocalist Bon Scott, was told he was at risk of going deaf.

The controversial Rose-AC/DC pairing received mostly positive reviews, but not before Rudd panned the collaboration, claiming that he wouldn't have been willing to rejoin the band if Rose remained at the mic. "If Angus [Young, AC/DC guitarist] wanted me to play, then that's up to him," Rudd said last year. "But I don't really want to play with Axl Rose. I don't really rate him."

However, in a brand new interview with Music Radar, Rudd sang a different tune, explaining that he has "watched some clips the other day of Axl singing with the boys. I was surprised; it wasn't too bad. I was quite surprised, I thought he did quite well and that's not an easy gig, mate, it's not an easy gig at all. AC/DC is a tough gig for everyone in the band. I saw Angus jamming with GUNS N' ROSES as well. Apart from watching those clips though, I don't know what's going to happen or what's going on with the band."

Rudd also revealed that has "spoken to a couple of the guys" in AC/DC, but added: "I can't say what's on the horizon for AC/DC, I can't really say. That's not my thing to say. I have seen, though, that GUNS N' ROSES are playing over here in Wellington [New Zealand] soon and they have a big tour all over the world. I wonder whether Angus will be happy to see GUNS N' ROSES going out on a big tour which means that AC/DC can't go out on tour. We will see. You'd need a crystal ball to know what's going to happen there."

Rudd, who has appeared on all but three of AC/DC's 18 studio albums, is getting ready for his first solo tour in support of his 2014 solo debut, "Head Job". It was the release of that album that led indirectly to Rudd's arrest, with the drummer allegedly so angry at a personal assistant over the way the record was promoted that he threatened to have the man and his daughter killed.