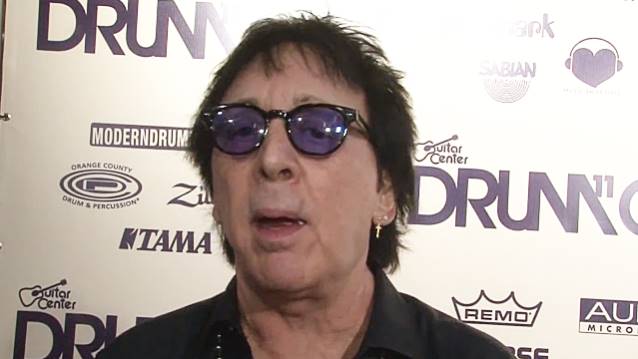 "It's disappointing to have to say to you, the fans, that as of today, [original KISS guitarist] Ace [Frehley] and I have been denied a performance with [fellow KISS founding members] Gene [Simmons] and Paul [Stanley] for our Rock And Roll Hall Of Fame induction. Tickets go on sale on Monday, February 24, and I wanted to make sure that fans understood that no original performance, in or out of makeup, has been offered to us before they purchased their tickets. This is disgraceful, and I feel bad for the fans who were looking forward to the four of us being inducted together.

The television broadcast will premiere on HBO on May 31.

In a 2012 interview with "The Opie & Anthony Show", Criss revealed that a power struggle, with Gene Simmons and Paul Stanley on one side, and Peter and Ace Frehley on the other, led to his departure from KISS. "I could start feeling [Stanley and Simmons] wanting the power," he said. "The more we were going up the ladder of future and fame, the more it was kind of swaying to Mr. Simmons and Stanley. Ace and I were kind of not getting our musical [ideas] in. It's funny — I wrote the biggest hit the band [ever had] [the 1976 ballad 'Beth'], and meanwhile, I was kind of always getting put down for this stuff. So it was always a battle."

According to Criss, he and Frehley were extremely close, which is why it was especially hurtful for the drummer to learn that Frehley was making more money when the farewell tour ended in 2000. "[It] broke my heart when [Ace] broke my heart," he said. "In the book, I tell the story, but towards the reunion, towards the end, I was devastated, man. I couldn't believe what went on. And it was again about the old M-O-N-E-Y. Money, money, money. Power, power, power. It never was enough for those guys."

Back in November 2012, current KISS drummer Eric Singer snapped back at some of the digs Criss threw his way in his autobiography, "Makeup To Breakup: My Life In And Out Of Kiss". Both Criss and certain die-hard fans take umbrage at the fact that Singer dresses in Criss' signature cat makeup onstage. Singer, who bookended Criss' reunion stints in the band, told Ultimate Classic Rock, "I don't have nothing against the guy, he's done nothing to me personally. I may have my own personal opinions of how I feel about him as a drummer, or how he's conducted himself, that I may or may not agree with everything, but that's really their [Criss, Gene Simmons and Paul Stanley's] beef."

Singer, a childhood KISS fan, was instrumental in getting Criss back into the KISS fold prior to the 1995 reunion and along with current guitarist Tommy Thayer, reportedly helped Criss get reacquainted with the long forgotten KISS material. "You gotta remember, this is Peter's chance to get some more attention for himself," Eric said. "Because, he really hasn't done much since he's been out of KISS… It's understandable why people become negative, or bitter, or cynical about something, but hopefully, they say that time heals, and I do believe that's true. Hopefully, we all get to that place in our lives when we look back at our experiences, and we try to remember the positive and the better things about them, rather than the negative and bad things."

Simmons remains baffled at why Criss decided to leave the band at the beginning of the decade following such a triumphant reunion tour and album. "Most people only have one chance, if at all, to swing the bat," Gene said. "Peter's had many chances. When there's a party, not everybody comes. And if you're not in the party, from the outside looking in, you scratch your head and say, 'Why wouldn't anybody want to go to the party? Lots of girls. Lots of money. Lots of good times.' You got me."