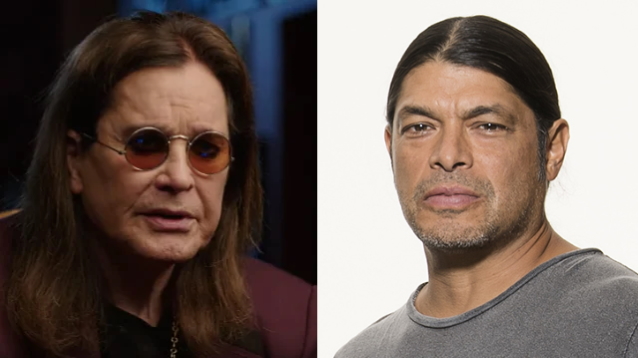 Ozzy Osbourne says that he is "really happy" his former bassist Robert Trujillo appears on his new solo album.

Trujillo, who had a seven-year tenure with Ozzy before joining METALLICA in 2003, has recorded a guest appearance on the legendary heavy metal singer's follow-up to 2020's "Ordinary Man" LP.

Speaking to the December issue of Metal Hammer magazine, which pays homage to METALLICA, Ozzy said: "Rob has always been a great friend of mine. He's a great bass player and a great guy; he's the only guy who, when it came time to move, did things the right way.

"I always ask that the guys who play with me, if they get another offer and want to move on, that's fine, just don't drop me in the shit, give me time to get a replacement. Rob's the only guy who ever did things right by me for that. I'm really happy we've got him playing on the new album as well."

Regarding the massive success of METALLICA's self-titled album, better known as The Black Album, which celebrated its 30th anniversary this year, Ozzy said: "In this business, there's a lot that'll surprise you and I'm forever being surprised by things. Clearly the album touched a nerve or something, but I just know that it's a really good album, you know? It's one of those albums that came at the right time and place, then took off. If we knew exactly what was needed to make an album go off like that, we'd all do it, but they got it perfectly right and made an absolute must-have album."

During his time in Ozzy's band, Trujillo appeared on the "Down To Earth" and "Live At Budokan" albums, as well as the 2002 reissues of "Blizzard Of Ozz" and "Diary Of A Madman". The latter two were widely panned by Osbourne fans when Sharon's wife and manager had Trujillo re-record original bassist Bob Daisley's parts after Daisley and drummer Lee Kerslake sued Ozzy and Sharon over royalties. They were restored for the 30th-anniversary editions.

Ozzy, who is signed to Sony Music, recently confirmed that 15 songs have been recorded for his next LP. He is once again working with producer Andrew Watt on the "work-in-progress" effort, which will include additional guest appearances by Jeff Beck, Eric Clapton, Tony Iommi and Zakk Wylde.

Last month, Ozzy told Metal Hammer magazine that his new album will be "similar in tone to 'Ordinary Man', but I can't describe it completely. I've not heard it for a while because it keeps going over to the next person to add their parts — we're fucking around with it all the time," he said.

Watt connected with Osbourne after meeting Ozzy's daughter Kelly at a friend's party and pitching her on the idea of Post Malone and Ozzy collaborating together.

In December 2020, Watt told Guitar World that he and the BLACK SABBATH legend were "halfway through" the new LP. "There's some songs on there that are like eight or nine minutes long that are these really crazy journeys. I'm really excited about it," he said.

Like "Ordinary Man", which featured Watt on guitar, Duff McKagan (GUNS N' ROSES) on bass and Chad Smith (RED HOT CHILI PEPPERS) on drums, Ozzy's next album will feature guest appearances by a number of other notable musicians. "There's a bunch of people involved," Andrew told Guitar World. "I can't say for sure until the end, but I started doing a bunch of basic tracks with Chad and Robert Trujillo, who used to play in Ozzy's band. And Taylor Hawkins [FOO FIGHTERS] also came in and played a bunch on the record as well, which adds a different flair — it kind of harkened back to Ozzy's '80s era, in a great way. And I think it's so cool for a rock fan to be able to listen to half an album with Chad Smith on drums, and then you flip it over and you get to hear Taylor Hawkins. And you know, the last album was really special for everyone involved. And so there was no point in Ozzy or me doing this again unless we thought we could bring something new to the table. And I feel like we're achieving that."