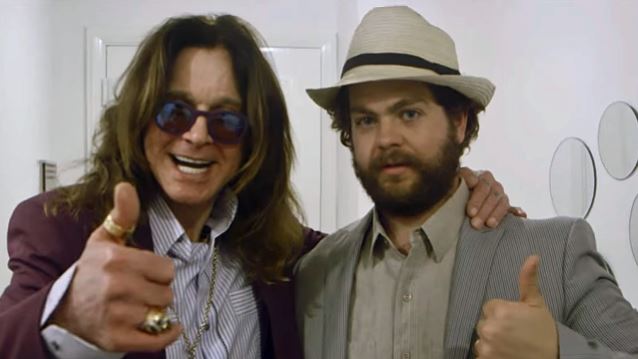 A new trailer has been unveiled for "Ozzy & Jack's World Detour", the new show produced by the History channel starring Ozzy Osbourne and his son Jack. The ten-episode series is set to kick off on July 24 at 10:00 p.m. and will feature the duo traveling the world together, exploring the history behind some of the planet's most storied sites, while checking out some lesser known locations along the way.

During the course of the hour-long, non-scripted series, father and son — self-proclaimed history nerds who have apparently waited years to take this trip — will visit locales like Mount Rushmore, Stonehenge, the Alamo, Roswell, the Jamestown Settlement and Sun Studios. They'll also stop at places like a missile silo, England's famed Bletchley Park and a private museum of working artillery tanks.

Ozzy has not starred in a regularly scheduled TV series since the MTV reality show "The Osbournes" ended a four-season run in 2005. A variety show called "Osbournes Reloaded" ended after one episode on Fox in 2009.

Ozzy and BLACK SABBATH are currently in the midst of the European leg of the band's farewell "The End" tour.

He and wife/manager Sharon Osbourne separated last month over Ozzy's alleged affair with a celebrity hairstylist. Us Weekly reported that Ozzy told Sharon he will "go to any lengths necessary to repair the damage" caused by the alleged tryst.