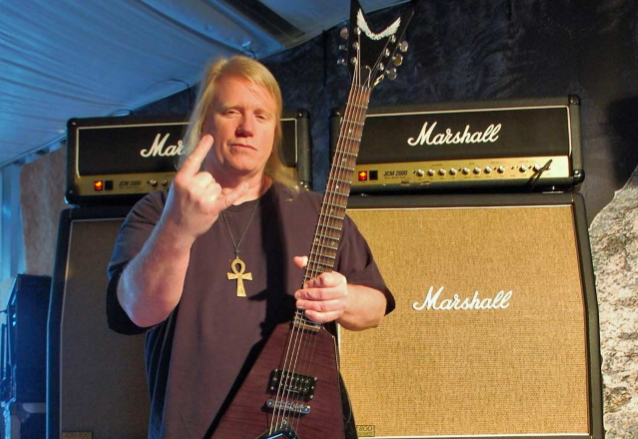 Karl Sanders, the driving force behind South Carolina's Egyptian-themed death metal titans NILE, has signed with Napalm Records for the release of the new album from his solo project.

Following the first two "Saurian" project albums — "Saurian Meditation" (2004) and "Saurian Exorcisms" (2009) — Karl is ready to unleash more musical musings from inside his eclectically influenced mind. To date, each "Saurian" release has explored unique, original compositions of haunting, primarily Middle Eastern inspired music in a cinematic, ambient and mostly instrumental format — similar to the quiet, exotic interludes found on NILE albums. Providing a diverse escape for both fans of NILE and those otherwise intrigued by its world music aura, "Saurian" proves that Sanders's universe is anything but one-dimensional.

In addition to releasing new "Saurian" music, Napalm will reissue both "Saurian Meditation" and "Saurian Exorcisms", with more details to come.

Sanders says about the signing: "I am just thrilled to death that we have signed up with Napalm Records for the new Karl Sanders 'Saurian' album. I am really happy that we have found such a good home for both NILE and my 'Saurian' side project, as they are a great company with some sincere people. I am looking forward in earnest to working together with everyone at Napalm to bring fans the new 'Saurian' music, as well as re-releasing the first two 'Saurian' records."

Besides Sanders, the only other musician appearing on "Saurian Exorcisms" was Mike Breazeale, who contributed chants and some vocals.

At the time of "Saurian Exorcisms"'s release, Sanders said that his influences were more varied and far-reaching than NILE fans may suspect. "What I've been trying to do is move away from strict Egyptian kind of influences and incorporate a broader range of inspiration," he said. "The music I'm making is not strictly traditional Egyptian music. I borrow and steal from the traditional music of many different cultures. There's some Tibetan stuff, some Indian stuff, some Arabic stuff, and so forth."