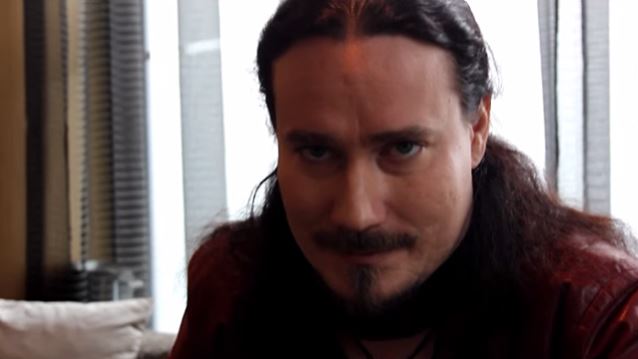 Italy's Blogo.it recently conducted an interview with NIGHTWISH keyboardist and main composer Tuomas Holopainen. You can now watch the chat below.

Speaking about the fact that NIGHTWISH chose to keep much of the music on its new album, "Endless Forms Most Beautiful", shrouded in mystery prior to the CD's release, Tuomas said: "I don't really see the point of giving, like, 30 seconds from each song, because, for me, personally, when a new album of my favorite band is released, it's an event; I don't want to know anything about it in advance."

He continued: "I remember when 'Far Beyond Driven' by PANTERA was released, I was really looking forward to the day when it was released and cycling to the record shop, getting the album, going back, just dedicating a few hours, just listening. That was an event. That sort of things seems to be… well, if not disappearing, but there's something of that mystery is gone — basically because of social media and the Internet.

"Don't get me wrong, I think the Internet is fab; it's the perfect way of spreading information and promoting and all that. But we would like to bring a little bit of mystery back into music and to bands as well. There's a reason why we do our best for keeping our privacy. We enjoy talking about music and the album and the live shows and all that, but personal stuff is personal for a reason."

Tuomas added: "I mean, one of my biggest idols, Vangelis [Greek composer of electronic, progressive, ambient, jazz, pop rock, and orchestral music], for example, nobody knows anything about him. He just comes out with new music every now and then, and that's it. And I really like that sort of image. It's just the music, and that's all that matters. That's the way it should be."

Asked if it was difficult to select a single from the new album, Holopainen said: "If it was up to me, we would never release singles in the first place. It seems so unfair to put one song on a pedestal to represent the whole album. And with this album, 'Élan' doesn't really give you the right impression of what's going on, but it's sort of a necessary evil that you have to do these days, and you just have to pick up that would possibly get some radio play, which would be an easy enough approach. This time, it was 'Élan'. That's it. [But] I wish people would listen to the album from beginning to the end."

"Endless Forms Most Beautiful" will be made available on March 31 in the U.S. via Nuclear Blast.