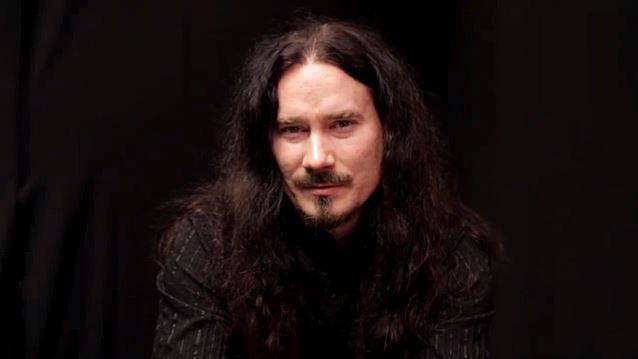 NIGHTWISH mastermind/keyboardist Tuomas Holopainen says that he felt "violated" when the band's new single, "Èlan", was leaked one week before its official release, and has admonished people who "honestly don't see anything wrong" with illegally spreading unreleased music on the Internet.

"When 'Èlan' was leaked, I heard about it, the whole band was really upset, and we ended up being vocal about it, yes," Tuomas said in a videotaped statement to TeamRock (see video below). "Now when I look back at the whole thing, I think it's good that we brought this thing into daylight, because it's a big problem these days — not because of money, but because it kills the mystery. Yeah, sure, maybe we could have taken a little breather before acting in the heat of the moment. I mean… Now, looking back, I would have done a few things differently, but you just felt so violated — even though it's very common, it happens to almost all the bands, but that's not the point. It's still wrong — it's very wrong — and we just wanted to make a statement about that. Because it even seems that today many people honestly don't see anything wrong about that, about spreading unreleased material in the Internet, because they wouldn't know any better."

Tuomas previously released a written statement explaining NIGHTWISH's strong reaction to the unauthorized release of the band's material. He said in part: "The leaking of a full album, or just a single song in advance, is a huge blow to the wonderful mystery which is surrounding the impending release of our new music. We have deliberately cultivated this so as to give our fans an event; a (hopefully) powerful surprise. The passionate posts on the band's Facebook page (which were done in the heat of the moment) were no doubt an honest reaction to the disappointment in someone deliberately spoiling a part of these efforts. To suggest that the band or the record label would do this on purpose is very 'conspiracy theory' and simply not true. The very thing we care about most is the music on the album, and the impact it will have on people."

He continued: "With that in mind, do try to avoid listening to this 'leak' and any others for that matter. Just wait to hear it as it is supposed to be — a labor of love, the fruit of dedicated hard work and of the highest quality. The way we would wish to experience it ourselves."

The "Èlan", video can be seen below. The clip was shot in Finland at various locations between September and November 2014, and it was directed by Ville Lipiäinen.

"Èlan" is the first single from NIGHTWISH's new full-length CD, "Endless Forms Most Beautiful", which will be made available on March 27 in Europe and March 31 in the U.S. via Nuclear Blast.

Longtime NIGHTWISH drummer Jukka Nevalainen sat out the recording sessions for "Endless Forms Most Beautiful" due to health issues; Kai Hahto (WINTERSUN, SWALLOW THE SUN, TREES OF ETERNITY) replaced him.

"Endless Forms Most Beautiful" features eleven new songs and will be released in different formats: